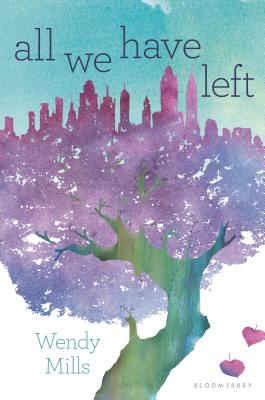 All We Have Left

Interweaving stories from past and present, All We Have Left brings one of the most important days in our recent history--September 11th--to life, showing that love and hope will always triumph.

Now:
Sixteen-year-old Jesse is used to living with the echoes of the past. Her older brother died in the September 11th attacks, and her dad since has filled their home with anger and grief. When Jesse gets caught up with the wrong crowd, one momentary hate-fueled decision turns her life upside down. The only way to make amends is to face the past, starting Jesse on a journey that will reveal the truth about how her brother died.

Then:
In 2001, sixteen-year-old Alia is proud to be Muslim . . . it's being a teenager that she finds difficult. After being grounded for a stupid mistake, Alia decides to confront her father at his Manhattan office, putting her in danger she never could have imagined. When the planes collide into the Twin Towers, Alia is trapped inside one of the buildings. In the final hours, she meets a boy who will change everything for her as the flames rage around them . . .


Praise For All We Have Left…

"The author elegantly transitions between the gripping descriptions of Alia and Travis trying to survive and Jesse almost falling into the abyss of generational hatred of Islam. In doing so, she artfully educates readers on both the aspects of Islam used as hateful stereotypes and the ruinous effects of Islamophobia. With almost poetic language, the author compassionately renders both the realistic lives, loves, passions, and struggles of Alia . . . and Jesse . . . as both deal with the fallout of that tragic day. Both a poignant contemplation on 9/11 and a necessary intervention in this current political climate." - starred review, Kirkus Reviews

"Harrowing and realistic, highlighting bravery and courage against impossible odds. Mills movingly examines how easily pain can metastasize into hate, while demonstrating the power of compassion, hope, and forgiveness with equal force." - Publishers Weekly

"Thoughtful, poignant . . . An important topic that deserves more dialogue than it receives. A moving portrait and important look at the lasting effects of one of our country’s greatest tragedies." - Booklist

"A timely plea for reconciliation suited to teens whose entire lives have unfolded in the lingering aftermath of 9/11." - BCCB

"Poignantly heartbreaking. . . . While likely to evoke more than a few tears, the story is also hopeful, suggesting that even in the wake of unimaginable tragedy, love can outweigh hate, friendship can counter fear, and compassion and understanding can begin the healing process." - VOYA

"Mills’s narrative mission--to portray the experiences of characters from very different backgrounds while bringing the horrific tragedy and its aftermath to life for contemporary teens--is fully accomplished. . . . [a] timely, ultimately hopeful story of love, courage, and human goodness when it matters most" - The Horn Book Magazine

"Teens will appreciate this carefully researched and authentic exposé of a difficult subject. . . . A heartfelt, three-hankie exploration of a topic all too many teens must confront." - Kirkus Reviews on POSITIVELY BEAUTIFUL

"Highly appealing to teens who would be interested in a more modern take on a well-trod genre." - SLJ on POSITIVELY BEAUTIFUL

"The emotional core of the novel is convincingly powerful . . . teens will likely appreciate the well-researched depiction of losing a loved one to cancer." - Booklist on POSITIVELY BEAUTIFUL

Wendy Mills is the author of Positively Beautiful and All We Have Left. She was born on the edge of the water and has never left it. She now lives with her family on a tropical island off the southwest coast of Florida, where she spends her time writing and dodging hurricanes.
www.wendymillsbooks.com
@WendyMillsBooks