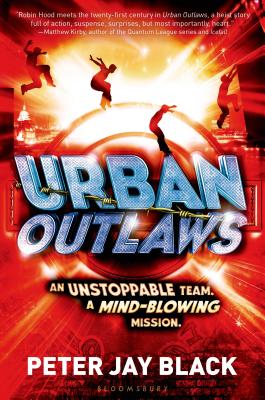 But the kids find themselves in serious trouble when they're caught in an epic battle to control Proteus, a genius super-computer. Proteus can crack any code in the world-and steal top-secret documents in nanoseconds. It's down to the Urban Outlaws to use their guile, guts, and skill to destroy the computer, avert world domination . . . and stay alive.

Don't miss the global launch of this debut series from Peter Jay Black-the perfect mix of explosive action, cool technology, and characters with lots of heart.

Peter Jay Black loves gadgets, films, and things that make him laugh so hard he thinks he might pass out. He went to Arts University Bournemouth and a career in IT followed. One day, a team of super-skilled kids popped into his head and, writing in a Hollywood apartment, he brought them to life. Peter lives in Dorset, and in his spare time he enjoys collecting unusual artifacts like Neolithic arrowheads, ancient Egyptian rings, and fossilized dinosaur poo.

“Where's my grappling hook and electronics gear? I'm ready to join Jack, Charlie, Wren, and the rest of the Urban Outlaw gang on their next mission. My youngest son and I spent as much time laughing as we did fighting over Urban Outlaws. We can't wait for the next book.” —J. Scott Savage, author of the Case File 13 and Farworld series

“Heads up, fans of Alex Rider: here's the next thing . . . The gripping plot twists through underground lairs, rooftop break-ins, shadowy government interrogations, and more . . . A fun, fast pick worthy of every middle-grade collection, this may even catch the attention of older reluctant readers.” —School Library Journal

“This debut novel packs in a lot of action that kids will gobble up with gusto . . . . [F]illed with exhilarating drama, clever dialogue, descriptions of cool gadgets, and characters who may be young but who display strong senses of social responsibility. A thrilling tale of a Robin Hood for the iPod generation.” —Kirkus Reviews