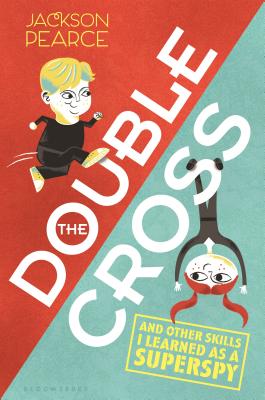 (And Other Skills I Learned as a Superspy)

Everyone in twelve-year-old Hale's family is a spy, going way back. They've all worked for the Sub Rosa Society, an elite organization that's so top secret that new agents aren't recruited; they're born. His parents may be the ultimate spy team at SRS, but Hale isn't your typical stealthy spy-he is, as his mother puts it, “big-boned,” and as some of his classmates put it, “fat.” Still, he's convinced he will someday be a great field agent. After all, it's his legacy.

But when both his mother and father go missing on a secret mission-likely captured by the SRS's number one enemy-it's Hale's time to step up and (with a little help from his acrobat-cheerleader little sister) save the day.

With a hilarious and charismatic cast of characters, popular teen author Jackson Pearce makes a very non-stealthy mission into the middle-grade arena.


Praise For The Doublecross: (And Other Skills I Learned as a Superspy)…

“Hale is a quick-thinking and daring underdog, with an impressive arsenal of skills and spy tricks. The book ends on a satisfying note but leaves plenty of room for future sequels. Fast-paced, funny, and full of unexpected plot twists, this spy novel will easily appeal to middle grade adventure fans.” —School Library Journal

“Exciting missions, cool gadgets, and plenty of intrigue make this a fun read from the get-go. The icing on the cake is Hale, whose self-deprecating manner, kind heart, and intelligence will steal hearts as well as the show. International espionage plus wacky high jinks equals plot-twisting fun.” —Kirkus Reviews

“An entertaining and memorable story. . . Pearce sets the stage for what could easily become a favorite series.” —Publishers Weekly

“A zany. . . clever protagonist. Oddball characters with plenty of heart and nifty gadgets will draw in readers who appreciate humorous underdog stories.” —Booklist

“It is easy to care what happens to these characters, even when readers are left wondering who is on the right side and who is not . . . will still satisfy readers looking for a thrill.” —VOYA on SWEETLY

“Fun, light reading that gives thoughtful and conscientious kids center stage.” —Booklist on AS YOU WISH

Jackson Pearce lives in Atlanta, Georgia, where she graduated from the University of Georgia with a degree in English and a minor in Philosophy. She began writing when she got angry that the school librarian couldn't tell her of a book that contained a smart girl, horses, baby animals, and magic. Her solution was to write the book herself when she was twelve.

Jackson is the author of a series of teen retold fairy-tales, including Sisters Red, Sweetly, Fathomless, and Cold Spell, as well as two stand-alones, As You Wish and Purity. As J. Nelle Patrick, she is the author of Tsarina. The Doublecross is her debut middle-grade.
www.jacksonpearce.com
@JacksonPearce