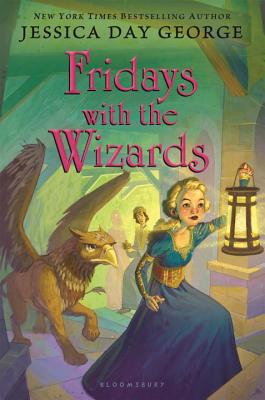 Fridays with the Wizards (Tuesdays at the Castle #4)

Princess Celie and her companions have made it home safely from the Glorious Arkower, and everything is back to normal now that the Eye of the Castle is where it belongs. With more magical griffins to care for, Celie, Lilah, and Rolf have their hands full. But when the dangerous ancient wizard Arkwright escapes the dungeon and goes missing within the Castle, no one can rest until he is found. Only Celie knows where he is most likely hiding--deep within the secret passageways behind the walls of their beloved Castle. With danger lurking behind every tapestry and under every trap door, Celie must find the wizard and save her family.

Readers will be swept away by another charming magical adventure featuring Princess Celie and her very special Castle.


Praise For Fridays with the Wizards (Tuesdays at the Castle #4)…

“Lovely and engaging, this fantasy series continues to have wide appeal.” —Booklist on THURSDAYS WITH THE CROWN

“Fans of the series will eagerly devour this latest installment.” —SLJ on THURSDAYS WITH THE CROWN

“A sweet, funny, sincere story in which siblings work together.” —Kirkus Reviews on WEDNESDAYS IN THE TOWER

“Castle Glower is the true star of this charming story of court intrigue and magic. A satisfying mix of Hogwarts and Howl's Moving Castle.” —SLJ on TUESDAYS AT THE CASTLE

“This enjoyable romp turns mischief into political action and a stone palace into a cunning character. . . . These kids are clever, as is George's adventure. May pique castle envy.” —Kirkus Reviews on TUESDAYS AT THE CASTLE