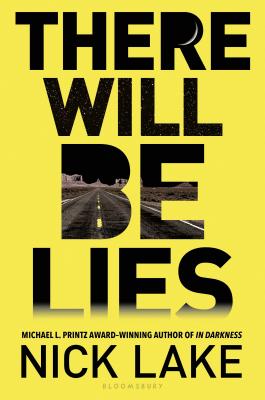 There Will Be Lies

In four hours, Shelby Jane Cooper will be struck by a car.

Shortly after, she and her mother will leave the hospital and set out on a winding journey toward the Grand Canyon.

All Shelby knows is that they're running from dangers only her mother understands. And the further they travel, the more Shelby questions everything about her past--and her current reality. Forced to take advantage of the kindness of unsuspecting travelers, Shelby grapples with what's real, what isn't, and who she can trust . . . if anybody.

Award-winning author Nick Lake proves his skills as a master storyteller in this heart-pounding new novel. This emotionally charged thrill ride leads to a shocking ending that will have readers flipping back to the beginning.


Praise For There Will Be Lies…

“Perplexing and disorienting, full of the rich language and heady epiphanies readers have come to expect from the Printz-award winning author.” —starred review, School Library Journal

“A rare joy to behold . . . Another impressive stylistic swerve from Printz-winner Lake.” —Booklist

“Suspenseful, complicated . . . A fine exploration of the power of story itself to heal the unconscious from scars physical and emotional.” —Kirkus Reviews

“Lake returns to the mix of reality and fantasy he used to great success in his Printz-winning In Darkness . . . Shelby is highly sympathetic, and readers will stick with her as she figures out who she can trust.” —Publishers Weekly

“Lake is truly a masterful storyteller . . . . This is a strange and beautiful story that truly deserves to be read. Do not hesitate to add this to your collection.” —VOYA

“This hallucinatory, kaleidoscopic mix of plot, characters, and setting is eminently discussable for its nuanced themes . . . . Lake continues to practice his craft at a high level.” —The Horn Book

“Unlike anything else currently in the YA market . . . Readers will be rewarded with a beautiful ending highlighting the importance of family, independence, and finding one's own way.” —Library Media Connection

“Lake employs a powerful combination of realism and myth to craft a resonant story of survival.” —BCCB

“A startling but successful feat of literary imagination.” —starred review, Publishers Weekly on IN DARKNESS