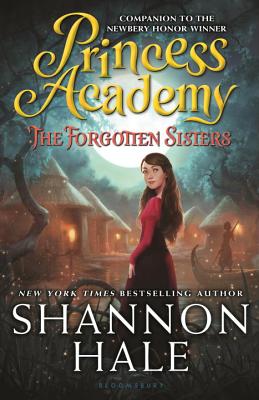 Miri has spent a year at the king's palace, learning all about being a proper princess. But instead of returning to her beloved Mount Eskel, Miri is ordered to journey to a distant swamp and start a princess academy for three sisters, cousins of the royal family. Unfortunately, Astrid, Felissa, and Sus are more interested in hunting and fishing than becoming princesses.

As Miri spends more time with the sisters, she realizes the king and queen's interest in them hides a long-buried secret. She must rely on her own strength and intelligence to unravel the mystery, protect the girls, complete her assignment, and finally make her way home.

Illustrated by Victoria Ying
Diana: Princess of the Amazons

For Adults
Austenland
Midnight in Austenland
The Actor and the Housewife

“Action packed and wellpaced, the story's depth incorporates artful negotiation, the importance of education, and citizens' equality and rights. This final installment of The Princess Academy trilogy certainly leaves room for more books if Hale were so inclined. Won't she reconsider?” —starred review, Booklist

“Miri, as spunky and smart as ever, returns in the final book of the award-winning Princess Academy trilogy. . . . Hale maintains her high quality of storytelling, with lots of action, plot twists and lyrical writing. . . . A laudable conclusion to a popular series.” —Kirkus Reviews

“Hale once again manages to create a cast of female characters diverse in their qualities and distinctly individual, offering an inclusive portrait of what girlhood and womanhood look like.” —BCCB

“Hale keeps the action taut and the young women smart and savvy. . . A decade after the Newbery Honor-winning Princess Academy was published, this third and possibly final installment in the series will please old and new fans alike.” —School Library Journal

“As always, Hale is a terrific storyteller: she deftly juggles plot, character, and setting; her prose is lyrical yet economical; and the themes of feminism and equality that run throughout the trilogy blossom in the resolution of this concluding volume. Readers will be sad to say goodbye, not just to Miri and company but also to Danland itself.” —The Horn Book

“Powerful and deeply engaging.” —Kirkus Reviews on PALACE OF STONE

“Palace of Stone . . . proves once again that with quick wit and brave words, one person really can change the world.” —School Library Journal on PALACE OF STONE

“The book is a fresh approach to the traditional princess story with unexpected plot twists and great emotional resonance.” —2006 Newbery Committee on PRINCESS ACADEMY

“This is not a fluffy, predictable fairy tale. . . . Instead Hale weaves an intricate, multilayered story about families, relationships, education, and the place we call home.” —starred review, School Library Journal on PRINCESS ACADEMY