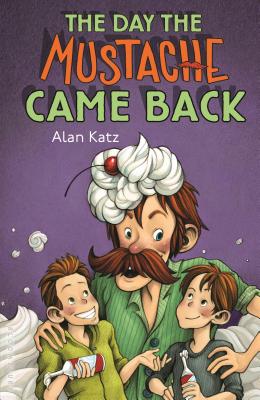 When Martin "Murray Poopins" Healey left the Wolfhardt household, all the responsible habits that David and Nathan had developed under his less-than-watchful eye went out the window. So when Myron, who is the spitting image (including the spit) of Martin, arrives on the Wolfhardt doorstep, he is instantly hired to watch Nathan and David. But Myron seems to know things that only Martin could have known, and before long Nathan and David are sure that something strange is going on with their mustachioed manny. As Myron takes them on wild adventures, the twins have their own agenda--to prove that Myron is Martin. But what if there's really a Martin and Myron, and what if they both want the nanny job? Will Nathan and David get a double dose of nannying?

Perfect for fans of Dan Gutman and Tom Angleberger, boys and girls will love the zany laugh-out-loud humor and fun illustrations found in every chapter.

"Filled with the same humor as the first volume, fans as well as new readers will delight in their adventures." - School Library Journal

"A kneeslapper of a sequel, well stocked with silly conversations and daft mishaps." - Booklist

"There's a laugh on every page, no, every sentence. It makes your head spin. And we all know how painful that can be. I loved it." - Dan Gutman, bestselling author of the My Weird School and My Weirder School series on THE DAY THE MUSTACHE TOOK OVER

"If you want to read a roller coaster ride of a book filled with humor, mystery, international espionage, meatloaf, and a miniature hyena, then you absolutely MUST read The Day The Mustache Took Over. This is Alan Katz's brilliant brand of comedy at its best." - Nick Bruel, bestselling author of the Bad Kitty books on THE DAY THE MUSTACHE TOOK OVER

"Stuffed with rapid-fire comedy, Alan Katz’s uproarious new novel will twist your brain until you scream. If The Cat in the Hat and Mary Poppins had a child, this crazy book would be it!" - Tony Abbott, author of Goofballs and The Postcard on THE DAY THE MUSTACHE TOOK OVER

"I laughed my head off. Which reminds me: has anyone seen my head?" - Tommy Greenwald, author of the Charlie Joe Jackson series on THE DAY THE MUSTACHE TOOK OVER

As a print and television writer, Alan Katz has majored in silliness for more than 30 years. He's written for Emmy-nominated TV shows (five years worth of parody songs and other funny stuff for The Rosie O'Donnell Show), animated series (like Taz-Mania, Disney's Raw Toonage and Goof Troop), several editions of the Grammy Awards and Tony Awards, Kids Are People Too, a slew of Nickelodeon projects, network specials, game shows, and articles for publications including the New York Times and the New York Daily News. He's also created hundreds of comic books, trading cards, web videos, and other special projects for kids and their parents. He lives in Connecticut with his family, including his twin sons.
www.alankatzbooks.com

Kris Easler has a masters in Illustration from Savannah College of Art and Design and lives in Chicago, Illinois.
www.kriseasler.com