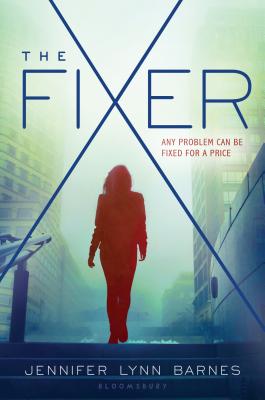 From the bestselling author of The Inheritance Games comes a pulse-pounding YA thriller that’s Scandal meets Veronica Mars.

When sixteen-year-old Tess Kendrick, teen fixer extraordinaire, is sent to stay with her older sister, she has no idea that the famed Ivy Kendrick is the capital's number one "fixer." For powerful people looking to make a scandal disappear, Tess's sister is there to help . . . for a price.

And no sooner does Tess enroll the prestigious Hardwicke School than she unwittingly finds herself following in Ivy's footsteps. Tess never thought she and Ivy had much in common, but when her new friends at school need help, she discovers that her talents quickly make her Hardwicke's go-to high-school fixer.

Secrets pile up as each sister lives a double life--until their worlds come crashing together in a conspiracy that reaches from the halls of Hardwicke to Capitol Hill. Suddenly, there is much more on the line than good grades, money, or politics. The odds are stacked against Tess, and the price for this fix might be more than she can pay.

Don't miss any of these other books by Jennifer Lynn Barnes:

The Fixer
Nobody
Every Other Day
Platinum
Golden


Praise For The Fixer…

“Barnes paints a convincing behind-the-scenes picture of national politics, and the social scene in the Hardwicke School mirrors the power-play atmosphere . . . . [R]eaders will find plenty to enjoy with the interesting characters . . . Intriguing.” —Kirkus Reviews

“Imagine Shonda Rimes's Scandal plunked into the middle of an elite private high school in Washington, DC . . . Barnes packs all of that and more in this YA thriller.” —School Library Journal

“In an intense CSI-type thriller . . . Barnes shows every card at just the right moment, catching readers off-guard at the final reveal. It's a stay-up-late-to-finish kind of book, and it doesn't disappoint.” —Publishers Weekly on THE NATURALS

“In this high-adrenaline series opener . . . Even a psychic won't anticipate all the twists and turns.” —Booklist on THE NATURALS

“The Naturals is Criminal Minds for the YA world, and I loved every page.” —New York Times bestselling author Ally Carter on THE NATURALS

“A tightly paced suspense novel that will keep readers up until the wee hours to finish.” —VOYA on THE NATURALS

“Barnes keeps readers engaged with a steady plaiting of suspense, action, and atmospheric description.” —School Library Journal on EVERY OTHER DAY

“A pleasurable ride through chases, escapes, sinister memories and romantic tension.” —Kirkus Reviews on NOBODY

“Barnes weaves a fantastic story line full of great plot twists and turns with a little romance sprinkled in. . . . A great read and a must have.” —School Library Journal on RAISED BY WOLVES

Jennifer Lynn Barnes has written several acclaimed young adult novels, including the Raised by Wolves and the Naturals series. She has advanced degrees in psychology, psychiatry, and cognitive science. She received her PhD from Yale University and is now a professor in psychology.
www.jenniferlynnbarnes.com
@jenlynnbarnes