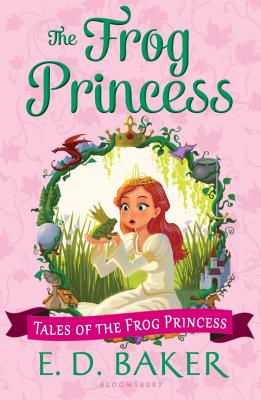 The first book in E. D. Baker's beloved Frog Princess series -- the inspiration for Disney's hit movie The Princess and the Frog!

Princess Emeralda a.k.a. Emma isn't exactly an ideal princess. Her laugh is more like a donkey's bray than tinkling bells, she trips over her own feet and she does not like Prince Jorge, whom her mother hopes she will marry. But if Emma ever thought to escape her troubles, she never expected it to happen by turning into a frog! When convinced to kiss a frog so he might return to being a prince, somehow the spell is reversed and Emma turns into a frog herself! Thus begins their adventure-a quest to return to human form.

Fascinating and hilarious characters ranging from a self-conscious but friendly bat to a surprisingly loyal snake and a wise green witch confirm that readers won't soon forget this madcap story.

Don't miss the rest of the Frog Princess series by E. D. Baker:

And these other magical series:

High-spirited romantic comedy. . . . Fans of Gail Carson Levine's Princess Tales should leap for it. Kirkus Reviews on The Frog Princess

As magically adventurous as fantasy can get. VOYA on Dragon's Breath

Baker's vividly imagined fantasy world . . . [is] irresistible and loaded with humor. VOYA on Once Upon a Curse

Kids will get a kick out of the hip Shrek vibe that Baker creates in this updated fairy tale. School Library Journal on No Place for Magic


Visit talesofedbaker.com for special giveaways and to learn more about all of E.D. Baker's books!