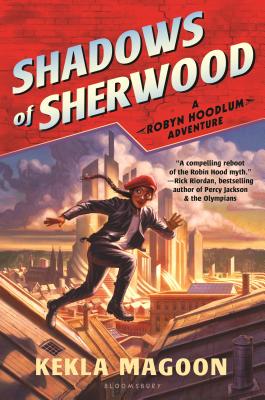 The night her parents disappear, twelve-year-old Robyn Loxley must learn to fend for herself. Her home, Nott City, has been taken over by a harsh governor, Ignomus Crown. After fleeing for her life, Robyn has no choice but to join a band of strangers-misfit kids, each with their own special talent for mischief. Setting out to right the wrongs of Crown's merciless government, they take their outlaw status in stride. But Robyn can't rest until she finds her parents. As she pieces together clues from the night they disappeared, Robyn learns that her destiny is tied to the future of Nott City in ways she never expected.
Kicking off a new series with an unforgettable heroine, readers will be treated to feats of courage and daring deeds as Robyn and her band find their way in this cruel, new world.


Praise For Shadows of Sherwood (A Robyn Hoodlum Adventure)…

"A compelling reboot of the Robin Hood myth." —Rick Riordan, bestselling author of Percy Jackson & the Olympians on Shadows of Sherwood

"What makes Magoon’s book unique. . . Is its accessibility to school-age and intermediate readers. . . This exciting page-turner will undoubtedly be a hit." —School Library Journal, starred review

"This colorful adventure does not easily fit into a genre box, as it combines futuristic elements with fantasy and folklore. . . The adventure and cliffhanging ending will entice readers." —Kirkus Reviews

"Set in the future and paced with one death-defying escape after another, Magoon’s (How It Went Down) story doesn’t end so much as pause. Readers--and Robyn--must wait until at least the second book in the Robyn Hoodlum series to learn the fate of her parents." —Publishers Weekly

KEKLA MAGOON is the award-winning author of several young adult novels including How It Went Down, Camo Girl, 37 Things I Love, Fire in the Streets, and The Rock and the River. Kekla received the 2010 ALA Coretta Scott King New Talent Award, and was a two-time NAACP Image Award nominee. Kekla holds a B.A. in History from Northwestern University and an M.F.A. in Writing from Vermont College of Fine Arts. Prior to becoming a full-time author, she worked with youth-serving non-profit organizations in New York City and Chicago.