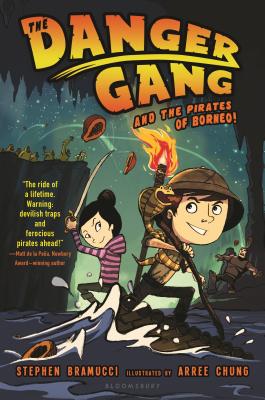 The Danger Gang and the Pirates of Borneo!

Ronald Zupan is a daring master adventurer! But he actually hasn't experienced any grand adventures . . . YET! When his world-traveling parents are kidnapped on his twelfth birthday, Ronald seizes the chance to prove himself with a dazzling, danger-defying rescue operation.

Teaming up with his trusty butler Jeeves, his quick-witted fencing nemesis Julianne Sato, and his pet cobra Carter, Ronald sets course for the jungle of Borneo where his parents were last sighted. If they can crash-land a plane and outrun a hungry snow leopard, surely they can find the secret lair of Zeetan Z, the world's most ruthless pirate! But as their adventure becomes more and more dangerous, can Ronald and his companions muster enough courage to see this adventure through?


Praise For The Danger Gang and the Pirates of Borneo!…

"Readers everywhere will devour the hilarious, action-packed adventures of Ronald Zupan. In this dazzling debut, Steve Bramucci takes us on the ride of a lifetime. Warning: devilish traps and ferocious pirates ahead!" - Matt de la Peña, Newbery Award-winning author of LAST STOP ON MARKET STREET

"I've closed the book, but I'm still wearing my adventure hat. I want to be ready when Ronald Zupan and his friends set off on their next courageous journey." - Cassie Beasley, author of CIRCUS MIRANDUS

"A fast-paced, comic update of a classic swashbuckler!" - Mac Barnett, co-author of THE TERRIBLE TWO

"Adventure, suspense, humor and heart! I loved reading about Ronald and his brave friends, and I know you will, too! Watch out evildoers--you don’t stand a chance against the unflappable Ronald Zupan!" - Varian Johnson, author of THE GREAT GREENE HEIST and TO CATCH A CHEAT

Arree Chung has worked in video games as a designer and art director. He received his ninja training at Art Center College of Design. When he is not practicing his ninja moves, you can find him playing basketball or riding his bike. Ninja! is the first book he has written and illustrated. Arree lives in the San Francisco Bay area with his family.
Loading...
or
Not Currently Available for Direct Purchase