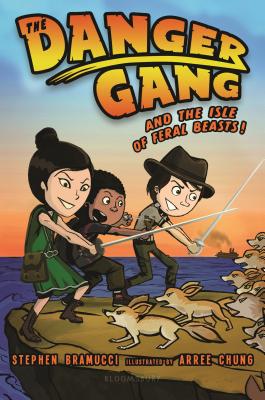 The Danger Gang and the Isle of Feral Beasts!

Ronald Zupan and the rest of the Danger Gang are back for their second rip-roaring adventure, perfect for fans of Indiana Jones and Lemony Snicket, fully illustrated by Arree Chung.

"The ride of a lifetime." --Matt de la Peña, Newbery Award-winning author on The Danger Gang and the Pirates of Borneo!

Ronald Zupan, his quick-witted fencing partner Julianne Sato, and his trusty butler Jeeves are off on another adventure. This time, they're trying to rescue the movie star Josh Brigand--who was kidnapped from his latest film premiere by the dreaded Liars' Club.

As the Danger Gang races to save their friend, they face off with a poisoning poet, a band of Roman candle-wielding thugs, and thousands of feral foxes. When their skills of deduction are put to the ultimate test, will Ronald and his pals be able to stick together long enough to rescue Josh and defeat the Liar's Club once and for all?

Fully illustrated by picture book talent Arree Chung, this hilarious, high-action series is a must-have for all adventurers.


Praise For The Danger Gang and the Isle of Feral Beasts!…

“Readers who have outgrown Captain Underpants and devoured A Series of Unfortunate Events will appreciate the over-the-top drama and outrageous skills of The Danger Gang.” —School Library Connection

Stephen Bramucci is an award-winning travel writer and adventurer. He's rowed down the Mekong Delta, crossed the Australian outback in a car powered by French fry oil, and explored ancient pirate islands in Madagascar. A lifelong animal lover, Steve's encounters with endangered species often come up in his classroom presentations.
@SteveBram

Arree Chung is the award winning author of Mixed: A Colorful Story, Out!, and the Ninja! series, which includes Ninja!, Ninja! Attack of the Clan, and Ninja Claus! Arree believes everyone is born creative and loves bringing ideas to life. When Arree is not making books or building a business, you can find him exploring nature or riding his bike in a new city.
Loading...
or
Not Currently Available for Direct Purchase