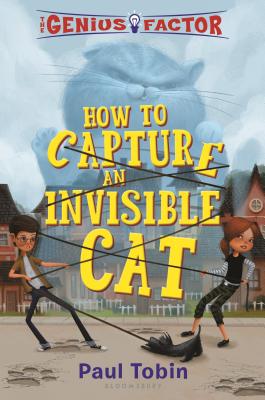 How to Capture an Invisible Cat

Every Friday the 13th, 6th grade genius and inventor extraordinaire Nate Bannister does three not-so-smart things to keep life interesting. This time, he taught a caterpillar math, mailed a love letter, and super-sized his cat Proton before turning him invisible.

As Nate and his new (well, only) friend Delphine race to stop Proton from crushing everyone and everything in town, they come face-to-face with Sir Jakob Maculte (the twenty-seventh lord of Mayberry Castle and leader of the nefarious Red Death Tea Society). Known for its criminal activity, killer tactics, and impressive tea brewing skills, the Red Death Tea Society will do anything to get in their way.

Nate and Delphine must pull out every mind-blowing gadget, half-perfected invention, and unproven but theoretically sound strategy they've got up their sleeves in order to survive to see Saturday the 14th!


Praise For The Genius Factor: How to Capture an Invisible Cat…

"This odd couple prove that teamwork works, and news of a sequel will likely be met with applause." - Booklist

"Aimed equally at boys and girls . . . This winning, consistently funny, smartly silly adventure could be one of Nate's kooky gadgets, a middle-grade reading attractor." —Kirkus Reviews