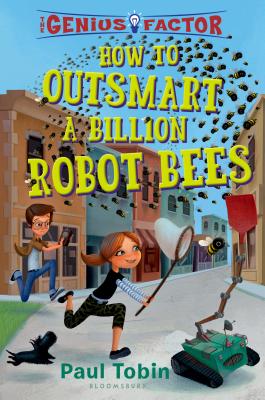 How to Outsmart a Billion Robot Bees

It's Friday the 13th again, and for sixth grade genius Nate Bannister, that means doing three more not-so-smart things to keep life interesting. But he has bigger problems than his own experiments. His nemesis, the Red Death Tea Society, is threatening to unleash a swarm of angry bees on the city of Polt if Nate doesn't join their ranks. But then a new group of people with murky intentions shows up -- the League of Ostracized Fellows -- and they want Nate as their own, too. To top it off, he's convinced there's a spy in his very own school.

Nate must once again team up with his new, resourceful, friend Delphine to save the day. They'll need the help of Nate's crazy gadgets, such as his talking car Betsy and super-powered pets Bosper the Scottish terrier and Sir William the gull, if they hope to see another Friday the 13th. Because they might be battling more than just sting-happy bees and villains with a penchant for tea this time around.


Praise For How to Outsmart a Billion Robot Bees…

"Plenty of silly elements that will make children laugh out loud . . . This will be a good selection to give to reluctant readers and will easily appeal to both boys and girls." - School Library Connection

"Fans of How to Capture an Invisible Cat will find an agreeable extension of its high jinks." - Kirkus Reviews

"Tobin uses humor and great imagination to offer younger middle grade readers a delightful romp that will appeal to fans of madcap adventure." —School Library Journal on HOW TO CAPTURE AN INVISIBLE CAT

"Middle grade readers, future inventors, and adventure-seekers will enjoy Nate and Delphine's encounters in this The Genius Factor title." —School Library Connection on HOW TO CAPTURE AN INVISIBLE CAT

"This odd couple prove that teamwork works, and news of a sequel will likely be met with applause." —Booklist on HOW TO CAPTURE AN INVISIBLE CAT

"Aimed equally at boys and girls . . . This winning, consistently funny, smartly silly adventure could be one of Nate's kooky gadgets, a middle-grade reading attractor." —Kirkus Reviews on HOW TO CAPTURE AN INVISIBLE CAT