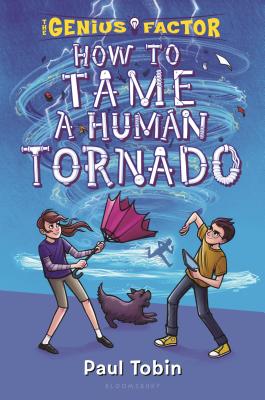 How to Tame a Human Tornado

The adventures continue for sixth-grade genius inventor Nate Bannister and his best friend Delphine in the third book of The Genius Factor series.

It's Friday the 13th again, and Nate hasn't just done one really outrageous thing. He hasn't even done THREE crazy things like normal. No, this time he's gone and hidden his science vials full of his inventions throughout the town of Polt. He's trying to avoid the Red Death Tea Society as always, who continue to hunt him down. They know where Nate lives now, so his only choice is to conceal his experiments in places they wouldn't think to look. But things are about to go very, very wrong, including: an overwhelming amount of toads in Polt, zebras running wild, and lightning storms that won't quit.

Nate and Delphine have been in lots of trouble before, but this is their most disastrous Friday the 13th yet . . . and we can't promise a happy ending quite yet.


Praise For How to Tame a Human Tornado…

"Plenty of silly elements that will make children laugh out loud. . . . will easily appeal to both boys and girls." - School Library Journal on HOW TO OUTSMART A BILLION ROBOT BEES

"Tobin uses humor and great imagination to offer younger middle grade readers a delightful romp that will appeal to fans of madcap adventure." - School Library Journal on HOW TO CAPTURE AN INVISIBLE CAT

"Middle grade readers, future inventors, and adventure-seekers will enjoy Nate and Delphine's encounters in this The Genius Factor title." - School Library Connection on HOW TO CAPTURE AN INVISIBLE CAT

"This odd couple prove that teamwork works, and news of a sequel will likely be met with applause." - Booklist on HOW TO CAPTURE AN INVISIBLE CAT

"Aimed equally at boys and girls . . . This winning, consistently funny, smartly silly adventure could be one of Nate's kooky gadgets, a middle-grade reading attractor." - Kirkus Reviews on HOW TO CAPTURE AN INVISIBLE CAT

Thierry Lafontaine is a character designer and illustrator for film and publishing. He is also the instructor for the Imaginism Studios In-House Workshop atelier program. Thierry lives, works, and teaches in Toronto.