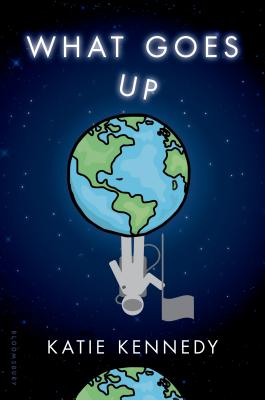 Rosa and Eddie are among hundreds of teens applying to NASA's mysterious Interworlds Agency. They're not exactly sure what the top-secret program entails, but they know they want in. Rosa has her brilliant parents' legacies to live up to, and Eddie has nowhere else to go--he's certainly not going to stick around and wait for his violent father to get out of jail. Even if they are selected, they have no idea what lies in store. But first they have to make it through round after round of crazy-competitive testing.

And then something happens that even NASA's scientists couldn't predict . . .

From the author of the acclaimed Learning to Swear in America comes another high-stakes adventure that's absolutely out of this world.


Praise For What Goes Up…

"Katie Kennedy has invented a young cast so sympathetic and disarmingly funny that even science-indifferent readers will resolve to understand the laws of physics . . . What Goes Up isn't so much about what's out there as about what's down here: the miracle of unlikely friendships, the mixed blessing of privilege and the stigma of social class." - starred review, Shelf Awareness

"It’s a complex plot and a great one; the concepts feel fresh, the humor and fear factors are perfectly balanced, and there are plenty of nifty sci-fi elements for genre buffs . . . a worthy second outing." - BCCB

"Kennedy again shows a knack for portraying real teens dealing with extraordinary circumstances. . . . Smart science, plenty of action, and no small amount of snarky banter round out an exciting and poignant read." - Publishers Weekly

"Kennedy has a confident hand in her sophomore novel, particularly when deploying the complicated quantum physics and rocket science that infuse her snappy plot. Along with light cliff-hangers, a geeky atmosphere, and quip-heavy dialogue, her well-defined characters and a sprinkle of romance keep the story’s feet on the ground. Fans of smart, funny sci-fi should get their hands on this one." - Booklist

"At turns sweet, funny, moving, and suspenseful, this is a book to devour. I fell in love with the endearing, maladjusted genius Yuri, and held my breath--fault of the all-too-real and terrifying threat steadily mounting throughout the story. A fantastic read!" - S. J. Kincaid, author of the Insignia trilogy and THE DIABOLIC on LEARNING TO SWEAR IN AMERICA

"The science Kennedy weaves throughout the story is fascinating and accessible, and Yuri and Dovie’s gentle romance is pitch-perfect. This novel is made to savor--readers will want to catch every nuance of Kennedy’s multidimensional characters." - starred review, Publishers Weekly on LEARNING TO SWEAR IN AMERICA

"The balance of wit, romance, danger, and one huge philosophical and ethical dilemma is brilliantly managed here. . . . A nail-biting climax with a cinematic aftermath and an even more nail-biting resolution round out this thoroughly entertaining sci-fi disaster, romance, action/adventure mashup." - starred review, BCCB on LEARNING TO SWEAR IN AMERICA

"Katie Kennedy is an author to put on your watch-for-and-read list!" - USA Today on LEARNING TO SWEAR IN AMERICA

"An end-of-the-world romp that will prompt readers to think and to laugh." - Kirkus Reviews on LEARNING TO SWEAR IN AMERICA

"An entertaining, genre-bending mix of quirky romance and realistic sci-fi, with some thought-provoking questions about adulthood thrown in for good measure." - Booklist on LEARNING TO SWEAR IN AMERICA

"Will appeal to many types of readers. Its NASA setting and sarcastic lead echo The Martian, while its quirky, whip-smart characters and sweet romance will capture Green and Rowell fans. . . . Recommended for all collections." - VOYA on LEARNING TO SWEAR IN AMERICA

"Katie Kennedy writes with incision, fire, and euphoria. Savor this one." - Christian Science Monitor on LEARNING TO SWEAR IN AMERICA

Katie Kennedy is the author of Learning to Swear in America and a college history instructor. She has a son in high school, and a daughter in college. She lives in Iowa--where the Interworlds Agency might be--and has a cornfield in her backyard. She hopes Rosa and Eddie land in it someday.
www.katiekennedybooks.com