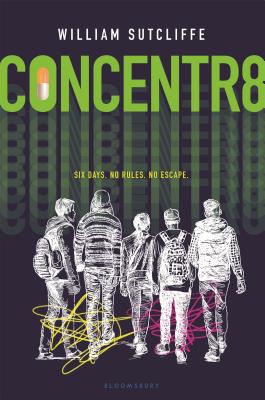 In a not-so-distant future London, riots have become the norm. But when the government suddenly stops distributing Concentr8--a behavioral modification "miracle" drug akin to Ritalin--the city's residents rise up fiercer than they ever have before.

Amidst the chaos, five teens pick a man seemingly at random and chain him up as a hostage in a warehouse. Blaze is their leader, and Troy has always been his quiet sidekick--the only person he has ever trusted. But even Troy didn't see this coming, and as their story unfolds over six tense days, one thing is clear--none of them will ever be the same again.

Told from the perspective of multiple characters in a world familiar to our own, this searing look at a group of teens who push back from the margins of society is perfect for fans of thoughtful fiction like Panic and The Program series.

"The conclusions to be drawn about the state of the mental health of children, and adults who are medicating “problem” children, will be food for thought among savvy teens. Recommended." - School Library Connection

"Narration moves from teen to teen, and each distinctive voice creates nuance with a mixture of hard-luck histories, dead-end futures, and resignation about the present . . . the story itself never preaches, and the real-life connection will likely strike a chord with fans of Young’s The Program." - BCCB

"Thought-provoking and rife with book-discussion fodder, this should be paired with other near-future books that ask “what if?” like those by Cory Doctorow." - Booklist

"Sutcliffe (The Wall) blends scathing political commentary with Jonathan Swift's sarcasm and Lord of the Flies–esque anarchy . . . With a writing style that is both entertaining and stark, Sutcliffe uses broad, vivid strokes to highlight societal injustice while filling in details that focus on the interconnectedness of friendship and the dangers of unquestioningly following a single leader." - Publishers Weekly

"[A] deeply moving tale. . . . Through brilliant pacing and a relatable protagonist, Sutcliffe sensitively portrays the brutal realities of military occupation." - School Library Journal on THE WALL

"This is wholly realistic fiction detailing a boy's coming-of-age in a real-life political situation." - Kirkus Reviews on THE WALL

"A riveting story." - Publishers Weekly on THE WALL

"Will draw in young readers preoccupied with society, challenging parents, and their own fears . . . . An often suspenseful tale." - New York Times Book Review of THE WALL

William Sutcliffe was born in London in 1971. He is the author of five previous novels: the international bestseller Are You Experienced?; The Love Hexagon; New Boy; Bad Influence and, most recently, Whatever Makes You Happy. His work has been translated into more than twenty languages. He lives in Edinburgh.
Loading...
or
Not Currently Available for Direct Purchase