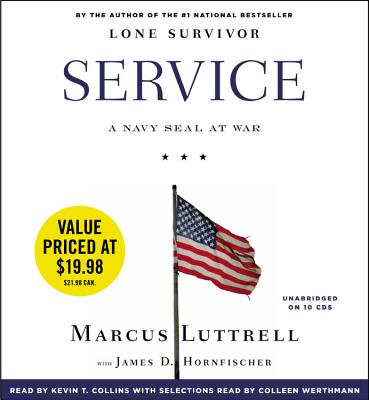 A Navy Seal at War

Navy SEAL Marcus Luttrell returned from his star-crossed mission in Afghanistan with shattered bones and a broken heart. So many had given their lives to save him-and he would have readily done the same for them. As he recuperated, he wondered why he and others, from America's founding to today, had been willing to sacrifice everything-including themselves-for the sake of family, nation, and freedom.

In Service, we follow Luttrell to Iraq, where he returns to the battlefield as a member of SEAL Team 5 to help take on the most dangerous city in the world: Ramadi, the capital of war-torn Anbar Province. There, in six months of high-intensity urban combat, he would be part of what has been called the greatest victory in the history of U.S. Special Operations forces. We also return to Afghanistan and Operation Redwing, where Luttrell offers powerful new details about his miraculous rescue. Throughout, he reflects on what it really means to take on a higher calling, about the men he has seen lose their lives for their country, and on the legacy of those who came and bled before.

A thrilling war story, Service is also a profoundly moving tribute to the warrior brotherhood, to the belief that nobody goes it alone and no one will be left behind.