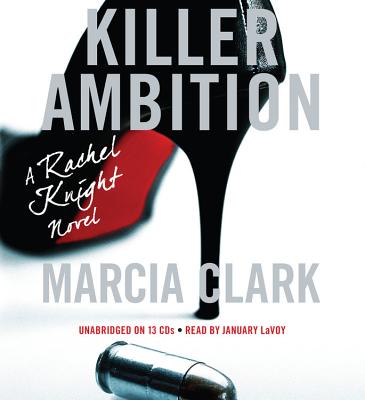 Los Angeles D.A. Rachel Knight faces down the murderously ambitious side of Hollywood in Marcia Clark's newest thriller.
When the daughter of a billionaire Hollywood director is found murdered after what appears to be a kidnapping gone wrong, Los Angeles Special Trials prosecutor Rachel Knight and Detective Bailey Keller find themselves at the epicenter of a combustible and high-profile court case. Then a prime suspect is revealed to be one of Hollywood's most popular and powerful talent managers--and best friend to the victim's father. With the director vouching for the manager's innocence, the Hollywood media machine commences an all-out war designed to discredit both Rachel and her case.
Killer Ambition is at once a thrilling ride through the darker side of Tinseltown and a stunning courtroom drama with the brilliant insider's perspective that Marcia Clark is uniquely qualified to give.

Marcia Clark began practicing law as a criminal defense attorney. She became a prosecutor in the L.A. District Attorney's Office in 1981, and spent ten years in the Special Trials Unit where she handled a number of high profile cases prior to the O.J. Simpson case, including the prosecution of stalker/murderer Robert Bardo, whose conviction for the murder of actress Rebecca Schaeffer resulted in legislation that offered victims better protection from stalkers as well as increased punishment for the offenders.

Since the Simpson trial, Ms. Clark has toured the U.S. and Canada giving lectures on a variety of women's issues including domestic violence and inspirational/motivational speeches, as well as lectures on the latest high profile cases, public service careers, and of course, the Trial of the Century.

In May of 1997, her book on the Simpson case, Without a Doubt was published and quickly rose to #1 on the New York Times, Wall St. Journal, Washington Post, LA Times, and Publisher's Weekly bestsellers lists.

From February 1998 to 2000 Marcia was under contract as a legal analyst and expert commentator for NBC, CNBC and MSNBC. She appeared weekly as the substitute host of Geraldo Rivera's "Rivera Live," and also hosted "Equal Time" for CNBC and "Judge and Jury" for MSNBC. Marcia has appeared on the "Oprah Winfrey Show," the "Larry King Show," the "Today" show, "The Early Show," and "Good Morning America," among others, and provides legal commentary on a wide variety of cable shows such as "Anderson Cooper 360" and "Issues with Jane Velez Mitchell."

Marcia Clark (with writing partner, Catherine LePard) has sold hour-long pilots to the FX network, Lifetime, and VH1 and developed a half hour comedy for NBC. She has also developed reality projects for CBS and was an executive producer of a one hour reality pilot for CBS.

Marcia has published three novels which feature Los Angeles Special Trials prosecutor Rachel Knight: Guilt by Association, Guilt by Degrees, and Killer Ambition, which is due out in June 2013. TNT has optioned the books and a drama series is currently in development. Marcia is attached as an executive producer. She's currently at work on her fourth novel.
or
Not Currently Available for Direct Purchase
Copyright © 2020 American Booksellers Association