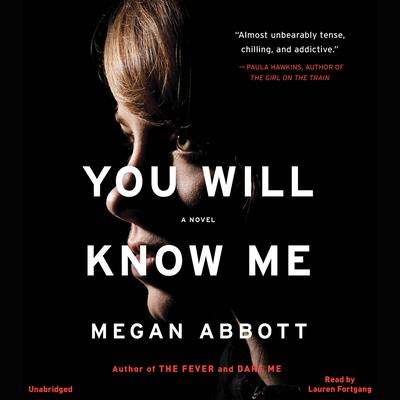 You Will Know Me (Digital Audiobook)

A "shocking and perfect" bestseller about family and ambition from the award-winning author of Dare Me and The Turnout (New York Times Book Review​).

How far will you go to achieve a dream? That's the question a celebrated coach poses to Katie and Eric Knox after he sees their daughter Devon, a gymnastics prodigy and Olympic hopeful, compete. For the Knoxes there are no limits -- until a violent death rocks their close-knit gymnastics community and everything they have worked so hard for is suddenly at risk.

As rumors swirl among the other parents, Katie tries frantically to hold her family together while also finding herself irresistibly drawn to the crime itself. What she uncovers -- about her daughter's fears, her own marriage, and herself -- forces Katie to consider whether there's any price she isn't willing to pay to achieve Devon's dream.

From a writer with "exceptional gifts for making nerves jangle and skin crawl" (Janet Maslin), You Will Know Me is a breathless rollercoaster of a novel about the desperate limits of parental sacrifice, furtive desire, and the staggering force of ambition.

Megan Abbott is the award-winning author of seven novels, including The Fever, Dare Me and The End of Everything. . She received her Ph.D. in English and American literature from New York University and has taught literature, writing, and film studies at New York University, the New School, and the State University of New York at Oswego. Her writing has appeared in the New York Times, Salon, Los Angeles Review of Books, New Statesman, Los Angeles Times Magazine, the Guardian and the Believer. She lives in New York City.