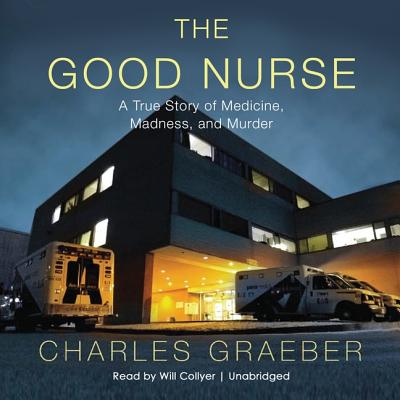 Charles Graeber, Will Collyer (Read by)

Charles Cullen, RN, was one of the most accomplished serial killers in recent history. For sixteen years, working in multiple hospitals, he had a hand in the deaths of as many as three hundred patients. Though colleagues knew--or had reason to know--what was going on, no one stopped himThe Good Nurse does more than tell the horrifying tale of Cullen's deadly career; it paints an incredibly vivid portrait of madness and offers an excoriating look inside America's broken medical system. Cullen is but one of the story's many riveting characters. Others include a down-and-out detective and an Erin Brockovich-type employee who wrestles with herself and the truth about her friend and colleague, eventually joining forces to end Cullen's killing spree. Impossible to put down, The Good Nurse ensures that listeners will never enter a hospital feeling the same way again.

Charles Graeber is an award winning journalist and contributor to numerous publications including "Wired, GQ, The New Yorker, New York Magazine, Vogue, Outside Magazine, Men's Journal, Bloomberg Businessweek, Travel + Leisure, " and "The New York Times, " and an occasional guest on CNN, NPR, and other radio programs. As a former medical student and researcher, his co-authored papers appeared in scientific journals including "Kidney International." His work has been honored with prizes including the Overseas Press Club award for outstanding international journalism, the New York Press Club prize for the year's best magazine spot news reportage, several National Magazine Award nominations, and inclusion in numerous anthologies. Born in Iowa, he now lives in Nantucket, MA and Brooklyn, NY. For more information, you can visit www.CharlesGraeber.com.
Loading...
or
Not Currently Available for Direct Purchase