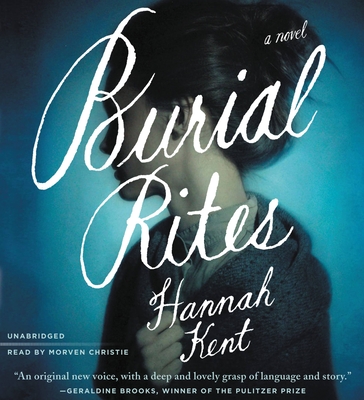 “Set against the desolate fire-and-ice landscape of 19th century Iceland, Burial Rites is a brilliant, multifaceted novel that traverses dark psychological terrain while providing pitch-perfect historical detail. Debut author Hannah Kent is equally skilled at delving into the mind of Agnes Magnusdottir---a servant woman convicted of murder and condemned to beheading---as she is at rendering the domestic life of the poor farmers charged with sharing their tiny hovel with her, as there are no prisons in Iceland. At once a brooding morality tale and a ferocious page-turner, Burial Rites is the kind of novel that asks serious questions while always remaining superbly entertaining.”
— Keaton Patterson, Brazos Bookstore, Houston, TX
View the List

Horrified at the prospect of housing a convicted murderer, the family at first avoids Agnes. Only Tv=ti, a priest Agnes has mysteriously chosen to be her spiritual guardian, seeks to understand her. But as Agnes's death looms, the farmer's wife and their daughters learn there is another side to the sensational story they've heard.

Riveting and rich with lyricism, Burial Rites evokes a dramatic existence in a distant time and place, and asks the question, how can one woman hope to endure when her life depends upon the stories told by others?

Hannah Kent was born in Adelaide in 1985. Her first novel, Burial Rites, has been translated into nearly thirty languages and was shortlisted for the Baileys Women's Prize for Fiction (formerly the Orange Prize), the Guardian First Book Award and the International IMPAC Dublin Literary Award. Hannah is also the co-founder and publishing director of Australian literary journal Kill Your Darlings. The Good People is her second novel.
Loading...
or
Not Currently Available for Direct Purchase