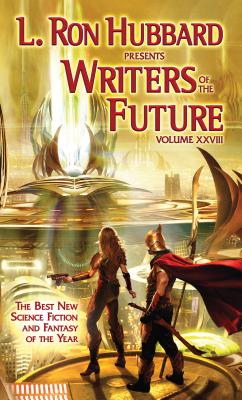 Science Fiction short stories from the freshest, most talented new voices in Science Fiction and Fantasy, each illustrated by the best new artist in the genre

Behold ... A magical woven man who holds the keys to the Kingdom...

Explore ... on Mars to unravel the fantastic mystery of a an ancient civilization.

Clone Wars ... can a clone become human when she her soul.

Alien Infestation ... To stop these deadly aliens, she must die repeatedly, like a vivid chapter of "All You need is Kill."

"The offerings are thought provoking and varied, with a trend towards excellence...The future is in good hands." --Publishers Weekly

"The Writers of the Future ... Long may it continue " --Neil Gaiman


Praise For L. Ron Hubbard Presents Writers of the Future Volume 28: The Best New Science Fiction and Fantasy of the Year…

"Writers of the Future is a terrific program for new writers, and goodness knows, there are few enough of those. It has my heartiest support and unqualified recommendation." —Terry Brooks, Author

"Prior to L. Ron Hubbard's Writers of the Future Contest starting, there was no field which enabled the new writer to compete with his peers—other new writers."
—Kevin J. Anderson, Author

"The Writers of the Future Contest has not only provided a place where new writers could break into print for the first time—but it also has a record of nurturing and discovering writers who have gone on to make their mark in the science fiction field. Long may it continue!" —Neil Gaiman, Author

With 19 New York Times bestsellers and more than 230 million copies of his works in circulation, L. Ron Hubbard is among the most acclaimed and widely read authors of our time. As a leading light of American Pulp Fiction through the 1930s and '40s, he is further among the most influential authors of the modern age. Indeed, from Ray Bradbury to Stephen King, there is scarcely a master of imaginative tales who has not paid tribute to L. Ron Hubbard.
Loading...
or
Not Currently Available for Direct Purchase