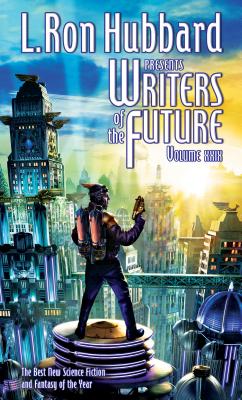 Science Fiction short stories from the freshest, most talented new voices in Science Fiction and Fantasy, each illustrated by the best new artist in the genre

Turn the page...open your eyes...and look into the future

They bend time, twist perception, and put a new spin on the laws of physics

They show us who we are, what we may become, and how far we can go

They are the Writers of the Future.

Alien Contact has meaning deep beneath the ads ... don't trust what you read

The Steampunk Clock is not only broken, so is TIME itself

She is not a dream weaver or a dream catcher... She is a dream eater

Hero Duty calls.... all the way from the Dead

"Keep the Writers of the Future going. It's what keeps sci-fi alive." --Orson Scott Card

With 19 New York Times bestsellers and more than 230 million copies of his works in circulation, L. Ron Hubbard is among the most acclaimed and widely read authors of our time. As a leading light of American Pulp Fiction through the 1930s and '40s, he is further among the most influential authors of the modern age. Indeed, from Ray Bradbury to Stephen King, there is scarcely a master of imaginative tales who has not paid tribute to L. Ron Hubbard.
Loading...
or
Not Currently Available for Direct Purchase