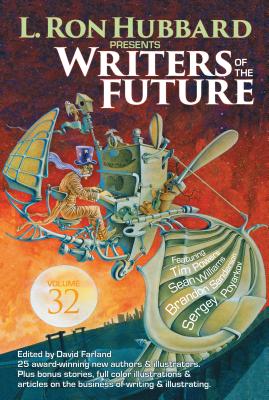 You are about to meet:

YOUR NEXT FAVORITE AUTHOR

The 32nd edition of Writers of the Future may be the best new book yet Brand-new adventure through space, time and possibility.

Along the way these new authors will introduce you to fascinating characters such as Nate, a very loyal companion--like most werewolves would be. Keanie has a parasite that lets her morph and so transform into anyone. Liz owns a dinosaur maker, but raw ingredients can be a problem. Anna slaves away in a factory but her magic leaves her unfulfilled. These authors take creative writing to a whole new level

The answers, the stories, the visions, and the mind-stretching possibilities are all waiting inside.

Welcome to the future of Science Fiction and Fantasy. It gets better every year. These are the award winning short stories of the international contest that have launched the writing careers of some of the best new books

"The Writers of the Future contest looks for people with the best imaginations who can see through the possibilities of the strangest and best ideas and tell stories that intrigue us and involve us." --Orson Scott Card