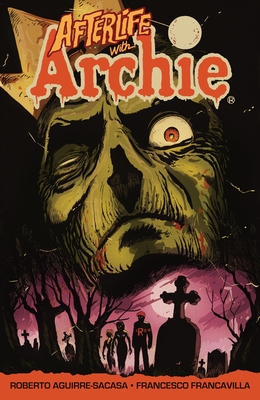 When Jughead's beloved pet Hot Dog is killed in a hit and run, Jughead turns to the only person he knows who can help bring back his furry best friend—Sabrina the Teenage Witch. Using dark, forbidden magic, Sabrina is successful and Hot Dog returns to the land of the living. But he's not the same... and soon, the darkness he brings back with him from beyond the grave begins to spread, forcing Archie, Betty, Veronica and the gang to try to escape from Riverdale!

"The story is taut with suspense, and each moment, whether quiet or gruesome, is illustrated in a masterly way." -- THE NEW YORK TIMES

"The most exciting comic on the shelves right now." --CraveOnline

"One hell of an entertaining read." --Ain't It Cool News

"One of the most exciting books on store shelves and the highlight of each month." --Nerdist

"Heartbreaking and heroic and gorgeous and absolutely perfect." -- COMICOSITY

"Whenever someone wants to know what mainstream comics are capable of, I hand them Afterlife With Archie." -- COMIC BOOK RESOURCES

“The book transcends great zombie fare. Aguirre-Sacasa and Francavilla should be insanely proud of this masterpiece.” -- HORROR NOVEL REVIEWS

ROBERTO AGUIRRE-SACASA is an award-winning playwright, screenwriter, and comic book writer. In television, he was a writer on the HBO series BIG LOVE for three years, and is currently a writer/producer on GLEE. For Marvel Comics, he has written SPIDER-MAN, NIGHTCRAWLER, THE FANTASTIC FOUR (winning a Harvey Award for MK 4), and many others, and also adapted Stephen King's epic novel THE STAND into a best-selling 30-issue series. His accomplishments in the theater world include over fifteen plays produced around the world; on Broadway, he was part of the team brought on to revamp SPIDER-MAN: TURN OFF THE DARK. For film, he has written the new 2013 CARRIE, based on the Brian DePalma classic, and a remake of the cult classic THE TOWN THAT DREADED SUNDOWN, both for MGM. For Warner Brothers, he has written a new version of the horror musical LITTLE SHOP OF HORRORS and is writing the live-action adaptation of ARCHIE.
Loading...
or
Not Currently Available for Direct Purchase