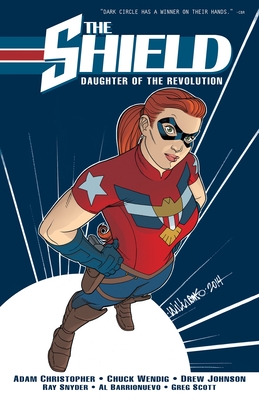 Daughter of the Revolution

Over the centuries, in our nation's times of need, a supernatural force appears to battle back the enemies of the United States: THE SHIELD.

Today, the country--the whole world--is on the edge of chaos. The middle class is dying as the rich get richer and the poor get poorer. Global warming's effects on the environment are drastic and dramatic, with superstorms and deadly droughts a common occurrence. The government increases its grip on the lives of ordinary people, controlling information and curtailing freedoms and privacy. For some, the government itself has become an enemy of the people, and revolution is on the minds of Americans all across the country.

The Shield returns--but what happens when she's not sure who the enemy is?

A modern action and conspiracy thriller by bestselling novelists Adam Christopher and Chuck Wendig featuring the dynamic artwork of David Williams, THE SHIELD: DAUGHTER OF THE REVOLUTION gives readers a topical, relevant and jarring new take on the classic hero.

THE SHIELD, VOL. 1: DAUGHTER OF THE REVOLUTION collects the first story arc of the ongoing THE SHIELD comic book series.

• ADAM CHRISTOPHER is a novelist and comic writer. In 2010, as an editor, Christopher won a Sir Julius Vogel award, New Zealand's highest science fiction honour. His debut novel, EMPIRE STATE, was SCIFINOW's Book of the Year and a FINANCIAL TIMES Book of the Year for 2012. In 2013, he was nominated for the Sir Julius Vogel award for Best New Talent, with EMPIRE STATE shortlisted for Best Novel. Born in New Zealand, he has lived in Great Britain since 2006.
• CHUCK WENDIG is a novelist, screenwriter, and game designer. He is the author of the novels BLACKBIRDS, MOCKINGBIRD, UNDER THE EMPYREAN SKY, BLUE BLAZES, DOUBLE DEAD, BAIT DOG, DINOCALYPSE NOW, BEYOND DINOCALYPSE and GODS & MONSTERS: UNCLEAN SPIRITS. With writing partner Lance Weilerhe has written the film PANDEMIC, showed at the Sundance Film Festival 2011, and their feature film HiM is in development. Together they co-wrote the digital transmedia drama COLLAPSUS, which was nominated for an International Digital Emmy and a Games 4 Change award. Much of his writing advice has been collected in various writing- and storytelling-related e-books.

Praise For The Shield, Vol. 1: Daughter of the Revolution…

“The Shield keeps you guessing page after page, panel after panel.” -- NERDIST
or
Not Currently Available for Direct Purchase
Copyright © 2020 American Booksellers Association