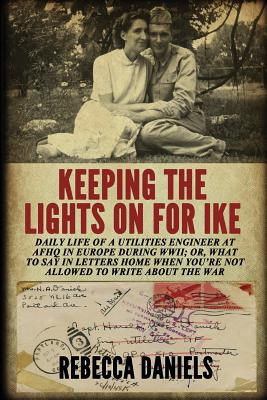 Keeping the Lights on for Ike

Daily Life of a Utilities Engineer at Afhq in Europe During Wwii; Or, What to Say in Letters Home When You're Not Allo

Most people don't realize that during the war in Europe in the 1940s, it took an average of six support soldiers to make the work of four combat soldiers possible. Most of what's available in the literature tends toward combat narratives, and yet the support soldiers had complex and unique experiences as well. This book is based on personal correspondence, and it is primarily a memoir that creates a picture of the day-to-day realities of an individual soldier told in his own words as much as he could tell under the wartime rules of censorship, that is] as well as giving insight into what it was actually like to be an American soldier during WWII. It explores the experiences of a non-combat Army utilities engineer working in a combat zone during the war in Europe and takes the protagonist from basic training through various overseas assignments--in this case to England, North Africa, and Italy as a support soldier under Eisenhower and his successors at Allied Force Headquarters. It also includes some reflections about his life after returning to Oregon when the war was over.

The soldier involved is Captain Harold Alec Daniels OSU, Class of 1939, ROTC] and most of the letters were written to his wife, Mary Daniels attended U of O in the late 1930s]. They are the author's parents, and she inherited the letter collection, photos, and all other primary source materials after her mother's death in 2006.