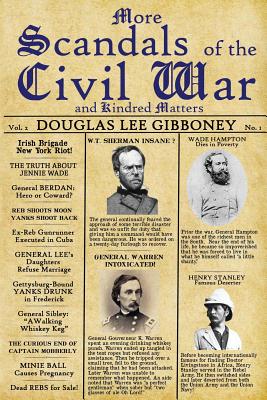 More Scandals of the Civil War

Yes, well...here we go again with a second serving of assorted sordid deeds, malicious gossip and just plain naughty behavior by Billy Yank, Johnny Reb and their female counterparts. As in the first volume of Scandals, these stories show there is truly nothing new under the sun; the on-going folly of mankind remains constant across the centuries. For better or worse, human nature does not change. But then, who doesn't enjoy a juicy scandal? As the late Washington dowager Alice Roosevelt Longworth once remarked, "If you haven't got anything good to say about anyone, come sit by me." Like the first volume, More Scandals is a tabloid history of the war. You'll find plenty of titillating tales here as this book opens with an unusual chronology of the war, highlighting not the bloody battles, glorious generals and great campaigns but the odd, the ugly and the unusual of everyday humanity. You'll notice the title does say "and Kindred Matters," allowing for a wide range of topics. Consider this a writer's privilege. The second part of the book deals with what happened to the boys in blue and grey once the fighting ended. Many lived well into the 20th century, five or six decades after the surrender of Robert E. Lee and Joe Johnston. These veterans would witness the United States transition into a modern era and begin its rise as an international power. It was a new industrial world far different from the antebellum times in which these old soldiers had been born. Nevertheless, for most of the survivors, the conflict of 1861 would remain the central touchstone of their lives. Irish Brigade New York Riot THE TRUTH ABOUT JENNIE WADE General BERDAN: Hero or Coward? Reb Shoots Moon; Yanks Shoot Back Ex-Reb Gunrunner Executed in Cuba GENERAL LEE's Daughters Refuse Marriage Gettysburg-Bound YANKS DRUNK in Frederick General Sibley: "A Walking Whiskey Keg" The Curious End of Captain Mobberly MINIE BALL Causes Pregnancy Dead REBS for Sale