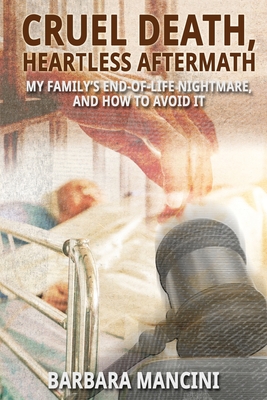 My Family's End-of-Life Nightmare and How To Avoid It

Ninety-three-year-old Joseph Yourshaw knew his end was near and had carefully planned so that he would have a peaceful and dignified death. He completed an advance directive, appointed his daughter, Barbara Mancini, as his health care proxy, and enrolled in home hospice care. He made it clear -- he wanted to die at home, in comfort and with dignity, not at a hospital. But it was not to be. A simple act of compassion on Barbara's part led her father to a medically intensive, horribly painful death in the hospital - and left her an accused felon, facing 10 years in prison. Falsely charged with trying to assist her father in a supposed suicide attempt, she fought back, in a case that consumed a year of her life, cost more than $100,000, and drew national media attention. Readers will learn about the bizarre and outrageous treatment authorities inflicted on her, including details that never appeared in news reports at the time.

Millions of Americans don't know it, but they or their loved ones could easily suffer a similar family tragedy. Readers will come to understand the risks they face and discover how to protect against them. The book also explores the combination of forces that so often cause people to die a death devoid of dignity and full of pain. Those forces include taboos about discussing impending death, religious ideology, ignorance of patients' legal rights, insufficient attention to effective pain management, poor hospice care, and the powerful life-saving imperatives of the health care system. Part memoir, part detective story about an innocent person's fight against injustice, and part social commentary, Cruel Death, Heartless Aftermath is a compelling narrative that holds valuable lessons for millions of readers.