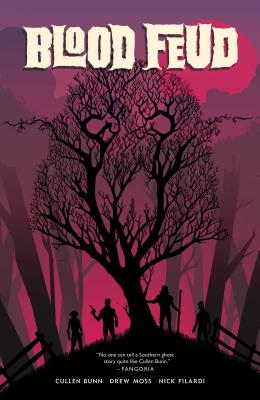 I’ve got a story to tell—a story about how me and a couple of poker buddies squared off against the very legions of Hell ... and maybe even saved the world. Like all good yarns, this one has its share of action, adventure, mystery, and romance. As for how it ends, though, you’ll have to judge for yourself. Me, I’ve always been partial to happy endings—the singing cowboy riding off into the sunset—but I reckon that just ain’t the way of the world. This story’s got vampires, too, loads of them, but not in the beginning. It began, for us at least, with spiders. Collecting 2015's most terrifying southern horror series from writer Cullen Bunn, artist Drew Moss, and colorist Nick Filardi!

Nick Filardi grew up in New London, Connecticut listening to Small Town Hero and watching Batman: The Animated Series. After graduating from Savannah College of Art and Design in 2004, he colored for Zylonol Studios under Lee Loughridge in Savannah, GA while maintaining the pretense of working an "office" job. He is currently living in Gainesville, Florida with his three-legged dog, DeNiro. You can find his work in Powers, The Victories, and Atomic Robo. He can be found on Twitter at @nick_fil.
or
Not Currently Available for Direct Purchase
Copyright © 2020 American Booksellers Association