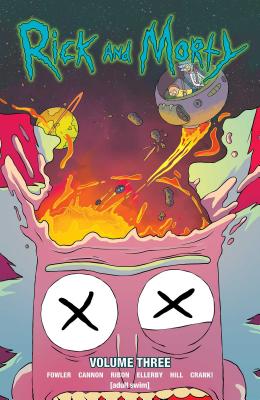 The hit comic book series based on Dan Harmon and Justin Roiland’s hilarious [adult swim] animated show RICK AND MORTY continues! Catch up on the adventures of degenerate genius Rick Sanchez and his bumbling grandson Morty as they explore the outer reaches of time, space, and anatomy. This volume features writer Tom Fowler in collaboration with series artist CJ Cannon in a three-issue tale of missing heads, galactic doom toasters, and Jerry screwing everything up (of course). Also included is "READY PLAYER MORTY," in which Rick takes Morty to a High School Simulation planet, by writer Pamela Ribon and artist Marc Ellerby, as well as a high-action deathball tournament one-shot written and drawn by Tom Fowler. Come for the jokes, stay for the soul-crushing ennui.

CJ Cannon is a self-taught artist living in Nashville, Tennessee. When they're not working on comics, outside riding their bike, or drumming, they're almost always in the house drawing fanart.

Marc Ellerby is a comics illustrator living in Essex, UK. He has worked on such titles as Rick and Morty, Doctor Who, Regular Show and The Amazing World of Gumball. His own comics (which you should totally check out!) are Chloe Noonan: Monster Hunter and Ellerbisms. You can read some comics if you like at marcellerby.com.
Loading...
or support indie stores by buying on