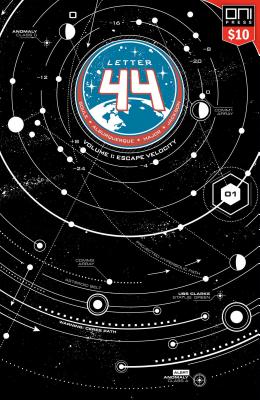 The hit series from Charles Soule (Poe Dameron, Daredevil) and Alberto Jiménez Alberquerque (Mystery Girl) is now available for just $10! Newly-elected president Stephen Blades hoped to tackle the most critical issues facing the nation: war, the economy, and a failing health care system. But in a letter penned by the outgoing president, Blades learns the truth that redefines "critical": seven years ago, NASA discovered alien presence in the asteroid belt, and kept it a secret from the world. A stealth mission crewed by nine astronauts was sent to make contact, and they're getting close—assuming they survive the long journey to reach their destination. President Blades has just become the most powerful man on the planet. This planet.

Alberto Jiménez Alburquerque is an artist born, raised and currently living in Madrid, Spain. He has put lines in French comic-books (BD's) for almost a decade now, working for Paquet Ed. and Soleil Ed. Some of his titles are: Fugitifs de l'Ombre (Paquet), Le Dieu des Cendres (Soleil), and Elle (Soleil). He has also drawn some short stories for the American comics Skullkickers (Image), Pathfinder's Goblins (Dynamite), and Robert E. Howard's Savage Sword and Mystery Girl (Dark Horse).
Loading...
or
Not Currently Available for Direct Purchase