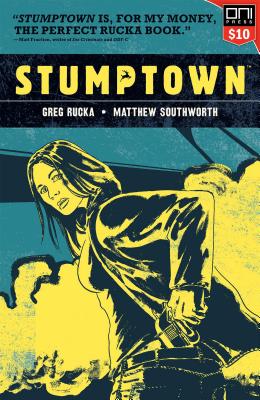 The Case of the Girl Who Took Her Shampoo

Join the investigation on Dex Parios's first case for just $10! Dex is the proprietor of Stumptown Investigations, and a fairly talented P.I. Unfortunately, she's less adept at throwing dice than solving cases. Her recent streak has left her beyond broke―she's into the Confederated Tribes of the Wind Coast for 18 large. But maybe Dex's luck is about to change. Sue-Lynne, head of the Wind Coast's casino operation, will clear Dex' debt if she can locate Sue-Lynne's missing granddaughter. Is this job Dex's way out of the hole or a shove down one much much deeper?

Matthew Southworth is a musician, playwright, filmmaker, and cartoonist who has living in Seattle, Washington. He used to lead a band called the Capillaries, and they never broke up. He directed an independent feature film that he very nearly finished. He came this close to getting his Masters in playwriting and directing from Carnegie Mellon University. In addition to Stumptown, he has drawn comics for Marvel, DC, and Image.
Loading...
or
Not Currently Available for Direct Purchase