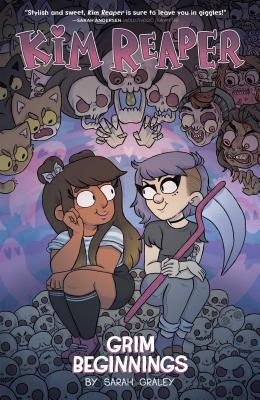 Unaware of the ghoulish drama she's about to step into, Becka finally gathers up the courage to ask Kim on a date! But when she falls into a ghostly portal and interrupts Kim at her job, she sets off a chain of events that will pit the two of them against angry cat-dads, vengeful zombies, and perhaps even the underworld itself. But if they work together, they just might make it... and maybe even get a smooch in the bargain.

"In Sarah Graley’s delightful new series, Death is not only a beautiful goth undergrad, she’s also the object of her classmate Becka’s massive crush. Becka’s infatuation, captured so wonderfully by Graley’s expressive cartooning style, takes the two on a chaotic journey, ranging from university romantic travails to hellish underworld portals. Now’s the perfect time to jump on board with this cute new series."
— Entertainment Weekly

"[...] Kim Reaper fits right in with books like Jonesy and Coady and the Creepies, as badass young women with supernatural powers figure things out as they go."
— Paste Magazine

"Stylish and sweet, Kim Reaper is sure to leave you in giggles!"
— Sarah Andersen, author of ADULTHOOD IS A MYTH

Sarah Graley is a comic writer and artist based in the UK. She’s been drawing Our Super Adventure and posting it online since 2012, and is also the author of the ever-spooky Kim Reaper, and the Rick and Morty: Lil’ Poopy Superstar miniseries.
Loading...
or support indie stores by buying on