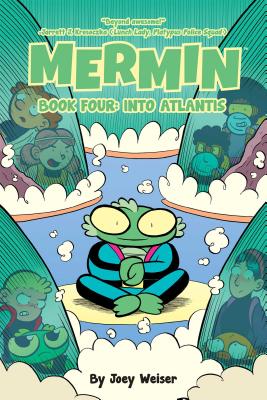 It's all-out war between Mer and Atlantis! At least that's what Mermin's father, King Merus, declares after Pete is taken by Atlanteans. And that's not all—Mermin will be fighting side-by-side with his father, so it's time for some intense training! Meanwhile, deep in the Kingdom of Atlantis, Pete meets other children without homes who, of course, cannot fathom that he is from the surface. His stories of Mer attract the attention of another child, who offers to introduce Pete to her “friends"—who he never expected to see in Atlantis!

Joey Weiser is the author of the Eisner Award-nominated MERMIN graphic novel series from Oni Press. His comics work ranges from writing and drawing for SPONGEBOB COMICS to coloring the JEDI ACADEMY: A NEW CLASS series. His first graphic novel, THE RIDE HOME, was published in 2007 by AdHouse Books. He is a graduate of the Savannah College of Art & Design and currently lives in Athens, Georgia.
or support indie stores by buying on
Copyright © 2020 American Booksellers Association