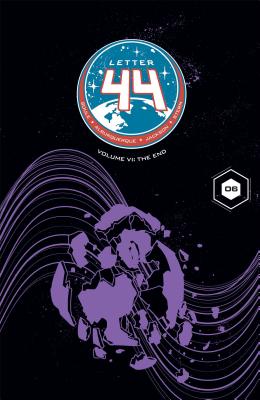 Earth will be destroyed. Stephen Blades, 45th president of the United States, knows this, and knows there will be no way to stop it. He knows the crew of the Clarke is most likely dead, and the the 666 that were supposed to be saved now have no chance. The most powerful man on the planet cannot protect it from its fate. But he will not give up. In this thrilling conclusion to the critically-acclaimed and award-winning series, the world will indeed end. But will it take humanity with it?

What is the most unfair thing you can think of? Got it in your head? Okay, forget that because there's a worse one: There's this guy who gets paid money for coloring comic books. Right. Dan Jackson has been gainfully employed to one degree or another with the coloring of comic books for the better part of 17 years. He's done other Great Big Projects with the fine folks at Oni Press, and he's done a bunch of covers and short projects with them as well. He's a pretty versatile guy. Even writes his own Bios. Mr. Jackson lives in the beautiful Pacific Northwest with his scorching hot wife (see? UN-FAIR!), and two hilarious kids.
Loading...
or support indie stores by buying on