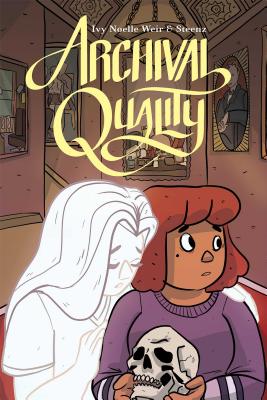 After losing her job at the library, Cel Walden starts working at the haunting Logan Museum as an archivist. But the job may not be the second chance she was hoping for, and she finds herself confronting her mental health, her relationships, and before long, her grasp on reality as she begins to dream of a young woman she's never met, but feels strangely drawn to. Especially after she asks Cel for help…

As Cel attempts to learn more about the woman, she begins losing time, misplacing things, passing out—the job is becoming dangerous, but she can't let go of this mysterious woman. Who is she? Why is she so fixated on Cel? And does Cel have the power to save her when she's still trying to save herself?

"In their appealing protagonist, Weir and Steenz return both librarians and people with mental and emotional distress to their original, esteemed roles as keepers of truthful history."
— Kirkus (starred review)

Ivy Noelle Weir has been writing stories for her entire life, and her essays on art, pop culture and librarianship have appeared in a variety of outlets. In addition to her writing, Weir is a visual artist and former librarian who studied photography at Parsons the New School for Design, art history at Goddard College, and holds an MLIS from Clarion University of Pennsylvania. A native of Philadelphia, she currently works in publishing and lives on a crooked old street in an apartment full of Halloween decorations with her partner and tiny dog.

Steenz is an illustrator from St. Louis, MO. According to her mom, Steenz has only ever answered "an artist" when asked what she wants to be when she grows up. Here we are, years later. Steenz spends a lot of time watching reality TV, eating pizza, working at Lion Forge and drawing comics. She can officially call herself a professional artist. Steenz lives with her fiancé, Keya, and her cat, Marko. Steenz is short for Christina.
Loading...
or support indie stores by buying on
(This book is on backorder)