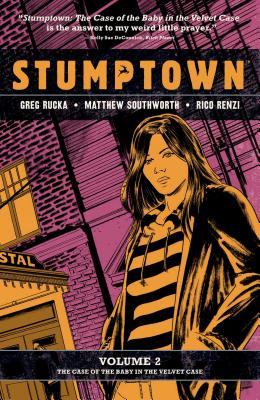 The Case of the Baby in the Velvet Case

Dex Parios, the proprietor of Stumptown Investigations, has a new office and a long list of clients she can't take on because of their involvement with crime lord Hector Marenco. So when Mim Bracca walks into her life with an open-and-shut case of a missing guitar, Dex is eager to get started, especially when the rock star pays her up front. But Dex soon discovers that it's not just the guitar that's gone missing... and she's not the only one looking for it.

Matthew Southworth is a musician, playwright, filmmaker, and cartoonist who has living in Seattle, Washington. He used to lead a band called the Capillaries, and they never broke up. He directed an independent feature film that he very nearly finished. He came this close to getting his Masters in playwriting and directing from Carnegie Mellon University. In addition to Stumptown, he has drawn comics for Marvel, DC, and Image.

Rico Renzi is an artist and designer from Washington D.C.. His work has appeared in WIRED and Fast Company Magazines, and various publications from D.C., Marvel, Image, Dark Horse, Scholastic, Boom Studios, Oni Press and IDW. He currently colors Spider-Gwen and The Unbeatable Squirrel Girl every month and resides in Charlotte, North Carolina with his wife and daughter.
Loading...
or support indie stores by buying on