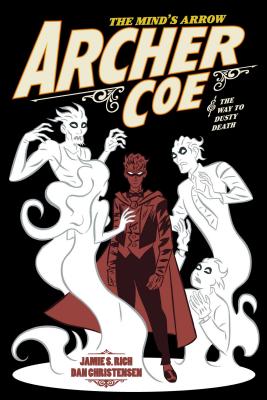 And the Way to Dusty Death (Archer Coe #2)

Archer Coe, master hypnotist, is back to performing by day and consulting for the rich and influential by night. Most of his cases are mundane—save his most recent, which ended in quite a few deaths—and that's what Archer expects from his newest client, heiress Nicolette Hardy. Her mother's untimely death has sent her father into a deep depression, and a self-proclaimed mystic, Jane Collins, has taken advantage of his grief by promising him an audience with his dead wife. Archer knows Jane, and he believes she's a fraud. But he has trouble convincing Nicolette's father, and as strange happenings unfold around him, Archer soon has trouble convincing himself. It's clear Jane holds some power—but it's also clear that Jane has no idea how much. Will Archer save Jane and the Hardys before her power becomes uncontrollable? Or will this case be his final curtain?

Jamie S. Rich is an author and editor who began his career in the early 1990s at Dark Horse Comics before moving to Oni Press, where he was Editor-in-Chief from 1998 to 2004. Rich is best known for his collaborations with artist Joëlle Jones on the graphic novels 12 Reasons Why I Love Her and You Have Killed Me. Their most recent and acclaimed collaboration has been Lady Killer. The series received four Eisner Award nominations in 2016. Rich published his first prose novel, Cut My Hair, in 2000, and his first superhero comic book, It Girl and the Atomics, in 2012. Currently, Rich is a Group Editor at Vertigo, an imprint of DC Comics.

Dan Christensen was born in California, grew up in Arizona, then moved to France. He attended art school in Angoulême, and has since written and drawn several graphic novels, including Red Hands and Paranormal. In addition to drawing comics, Dan works as a freelance translator for French comic book publishers Ankama, Dargaud and Futuropolis, and has illustrated books for role-playing games publisher Hero Games. He currently lives and works on the west coast of France.
Loading...
or
Not Currently Available for Direct Purchase