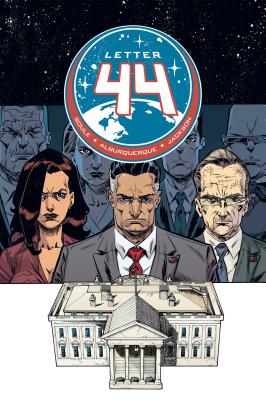 Newly-elected president Stephen Blades hoped to tackle the most critical issues facing the nation: war, the economy, and health care. But in a letter penned by the outgoing president, Blades learns the truth that redefines "critical": seven years ago, NASA discovered alien presence in the asteroid belt, and kept it a secret from the world. A stealth mission crewed by nine astronauts was sent to make contact, and they’re getting close—assuming they survive the long journey to reach their destination.

This deluxe edition collects the first 2 arcs of the critically-acclaimed and award-winning series in a new oversized format. Packed with extras, behind the scenes bonus material, sketches, concept art and more, this is one collection not to be missed.

What is the most unfair thing you can think of? Got it in your head? Okay, forget that because there's a worse one: There's this guy who gets paid money for coloring comic books. Right. Dan Jackson has been gainfully employed to one degree or another with the coloring of comic books for the better part of 17 years. He's done other Great Big Projects with the fine folks at Oni Press, and he's done a bunch of covers and short projects with them as well. He's a pretty versatile guy. Even writes his own Bios. Mr. Jackson lives in the beautiful Pacific Northwest with his scorching hot wife (see? UN-FAIR!), and two hilarious kids.
Loading...
or support indie stores by buying on