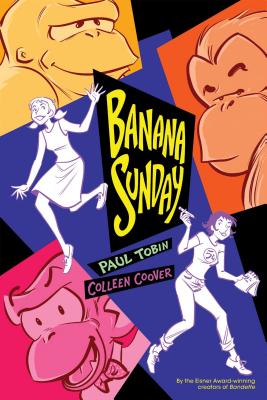 Kirby Steinberg is having a bit of trouble fitting into her new school. Sure, there's the usual problems associated with being from "somewhere else," but this time the new kid also happens to be the guardian for three talking primates. Chuck, the professorial orangutan. Knobby, the love-stricken spider monkey. Go-Go, the befuddled golden gorilla. These primates have learned to speak, thanks to the scientific processes of Kirby's father. Or have they? What's their real story? That's what Nickels—Kirby's new best friend and unfortunately dedicated school reporter—would like to discover. Can Kirby find time to develop a relationship with Martin, the dashing nerd? Steer clear of Skye, the high school's #1 pillar of arrogance? Keep Knobby, Chuck and Go-Go from causing untold catastrophes? And, above all, will Kirby be able to hide the real origin of these three simians from Nickels? Oh, probably not.

"I hope you like mysteries and teen antics and simians and being charmed off your feet, because Tobin and Coover deliver all that in Banana Sunday, their breakthrough graphic novel. It’s nothing short of dazzling."
— Jeff Parker, author of Batman '66

"Banana Sunday is the kind of imaginative work that's perfect for comics. It's got a creative premise -- a girl named Kirby starts at a new school while taking care of three apes -- that would be too expensive or ludicrous to do anywhere else, yet it emphasizes internal conflict with sympathetic characters. The emotions are universal, such as young love on a first date or a reporter's conflict between loyalty and seeking the truth or the debate over how to stand up to a bully."
— Comics Worth Reading

"Coover's style is pure fun on the page, with sweet looking girls and silly little monkeys. A perfect combination, if you ask me."
— Ain't It Cool News

Colleen Coover is an Eisner Award-winning comic book artist based in Portland, Oregon. Her comics include the adult title Small Favors and the all-ages Banana Sunday. She has been published by Dark Horse, Top Shelf, Marvel, and many others. She works with her husband, writer Paul Tobin, on the Eisner-winning series Bandette.

Paul Tobin is a New York Times-bestselling author. His writing includes Bandette, Colder, and many other comic books, graphic series and works of fiction. Bandette, drawn by Colleen Coover, was awarded the Eisner Award for Best Digital Series in 2013, and again in 2016. It was also a finalist for the Oregon Book Award for Graphic Literature in 2016. Paul’s graphic novel I Was the Cat, created with artist Benjamin Dewey, was nominated for an Eisner Award in 2015. The Genius Factor: How to Capture an Invisible Cat, first in Paul’s series of five novels for middle-grade readers, debuted in 2016 from Bloomsbury Kids. The second book in the series, How To Outsmart A Billion Robot Bees, released in March 2017.

Rian Sygh is a freelance comic artist and living enigma working out of Charlotte, NC with his partner and two cats. He's done both illustration and sequential work with Boom! Studios, Diamond, HarperCollins, Oni Press, Valiant, and Z2 Publishing. He is the artist and co-creator of the Prism Award-winning comic The Backstagers. Which is pretty good, honestly.
or
Not Currently Available for Direct Purchase