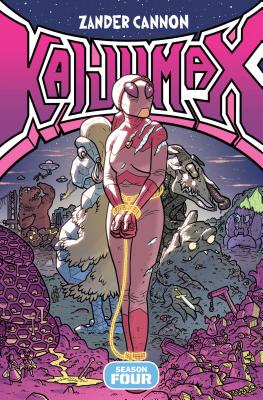 Scaly is the New Black

"This is a poignant, modern critique of culture in an easily accessible and satirical package. Fans of brainy, incisive comics should look no further than Kaijumax." – BOOKLIST

The fourth volume of the critically acclaimed Kaijumax series by Zander Cannon, a socially conscious comic about monsters in & out of prison.

Scaly is the New Black as we timidly venture into KAIJUMAX's sister location and meet its terrifying residents. After murdering her abusive inmate boyfriend and unable to scale back down to human size, former prison physician Dr. Zhang joins a collection of uranium addicts, violent offenders, con artists, Lovecraftian horrors, and metaphors for human encroachment in the heretofore unseen female wing of Kaijumax. New and returning kaiju assimilate into their respective species, join gangs, and establish their various prison hustles while the underfunded and overextended 5-robot prison administration scrambles to keep them under control.

Since 1993, Zander Cannon has written and drawn comics about gods, robots, astronauts, police officers, paleontologists, aliens, feng shui masters, superheroes, and monsters. He lives in Minnesota with his strong wife, Julie, and above-average son, Jin.
Loading...
or support indie stores by buying on