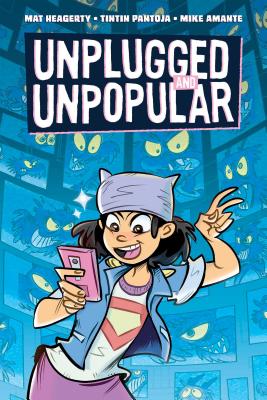 After Erin Song's parents ban her from using her phone, TV, Internet, and all her screens, she soon discovers mysterious, strange creatures and must foil their plot to take over Earth in this hilarious sci-fi graphic novel for tweens.

Erin Song lives in a digital world. Everyone has a phone, a tablet, a computer—more screens than you can count. Even with a world of information at her fingertips, Erin can’t figure out the secret to popularity at her clique-y junior high school. So when uber-popular Wendy asks for help cheating on a test, Erin jumps at the opportunity. This could be her big break! Unfortunately, she gets caught, and her parents ban her from all her devices. Suddenly, Erin Song is the only girl in the world who’s not allowed to look at a screen.

And that’s when Erin notices something funny: small, furry aliens making humans disappear with a weird device Erin’s never seen before. No one else notices them, though—except Erin’s grandmother and two old men who run the local library. They’ve discovered that the aliens are using screens to control the human race, tricking them into thinking they aren’t really there—and that anyone who’s been abducted never existed.

Now it’s up to Erin and her grandmother to save the day! But without technology on their side, do they stand a chance?

Praise For Unplugged and Unpopular…

"Unplugged and Unpopular is a funny, vibrantly-illustrated graphic novel packed full of surprises. This book will convince readers to put down their phones and play outside... OR ELSE."
— Kristen Gudsnuk (Making Friends)

Mat Heagerty lives in the Bay Area with his wife, daughter, son and black lab. For over a decade he’s bartended at a really special bar in San Francisco called El Rio. Mat’s dyslexic, and struggled a bunch in school, but now he writes rad comics like ‘Unplugged and Unpopular’ and this one! You can find him on twitter @matheagerty or on his website matheagerty.com.

Tintin Pantoja has previously illustrated graphic novels such as WHO IS AC? (written by Hope Larson) and the MANGA MATH MYSTERIES series (by Melinda Theilbar). She enjoys journaling, fountain pens, and fine chocolates. UNPLUGGED & UNPOPULAR is her first all-digitally-inked book, which means she'd be the first one brainwashed! She also loves bad puns and window shopping. Tintin lives in Manila, Philippines with four dogs and 1/2 cat.

Mike Amante is a freelance children's book illustrator who has worked on the SHAHNAMEH FOR KIDS series and on OMF Literature books such as DYARAN! ANG KAMBAL NA HEBIGAT! (TADA! THE HEAVYWEIGHT TWINS!) and ANG ALLOWANCE NA HINDI BITIN. He loves to drink tea, listen to lo-fi music and read comics. He thinks aliens are cool so he made a bunch of minicomics about them. Mike currently resides in Laguna, Philippines along with his family and their overly energetic poodle.
Loading...
or support indie stores by buying on