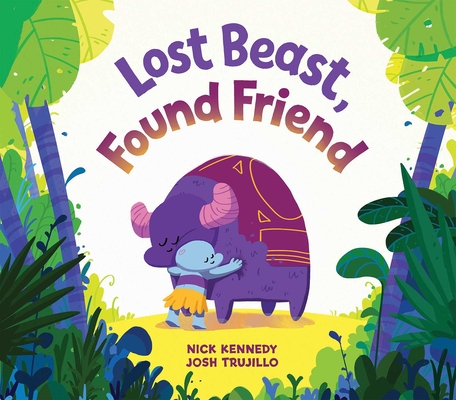 Lost Beast, Found Friend is the moving, uplifting adventure story about an unlikely friendship between a young girl and a magical beast.

Keelee is a brave, young girl who discovers a purple, fuzzy, funny beast! Together the two must make their way across this fantastic land to return Beast to his home. This is a touching tale of friendship and fun that children will want to revisit again and again. The children’s book is the debut of painter Nick Kennedy and comics writer Josh Trujillo (Dodge City). Lost Beast, Found Friend transports readers to a lush, tropical world, and Kennedy’s unique style gives Keelee and her new friend a vivid fantasy world to play in. This book will stick with readers of all ages long after story-time is over. Lost Beast, Found Friend is a charming and vibrant adventure story for the explorer in all of us!

Trujillo speaks for inclusiveness and diversity in popular media, and works alongside groups including the USC ONE Archive and Prism Comics. Josh loves his dog, his country, and is of good moral fiber.

You can remain updated on his work by following Josh on Twitter @LostHisKeysMan.

Nick grew up in Alabama, drawing all day long. When he got older, he moved to California. He kept drawing and painting and creating all kinds of art. He is home whenever there is a box of colors and an empty piece of paper.
Loading...
or
Not Currently Available for Direct Purchase