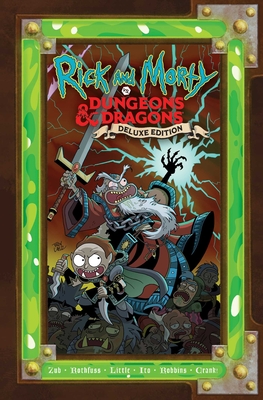 It's the COMPLETE ADVENTURE! Grab your dice, pencils, and spell book, as Rick and Morty Vs. Dungeons & Dragons returns in this deluxe edition hardcover!

Featuring all eight issues of the hit series, plus a BRAND NEW story from Jim Zub and Troy Little featuring Mr. Meeseeks conquering The Forgotten Realms! Over 250 pages of monsters, mayhem, and a bag of holding worth of bonus materials.

When Morty asks Rick for help learning how to play D&D because he has a crush on a girl, and it ends up drawing the entire family into a D&D world, where they inadvertently help "the bad guys" win, but make it right in the end. Then, in the hit series PAINSCAPE, magical D&D adventures coming to Earth, and no one will survive the Painscape! The world’s greatest role-playing game returns to plague the world’s most dysfunctional animated family and this time, we can’t just rest on brand name recognition and curiosity to fuel your interest, Morty, because no one gives a d-d-damn about sequels unless they’re really good, so no pressure, you f***ing hacks!

Patrick Rothfuss is the bestselling author of The Kingkiller Chronicle. His first novel, The Name of the Wind, won the Quill Award and was a Publishers Weekly Best Book of the Year. Its sequel, The Wise Man’s Fear, debuted at #1 on The New York Times bestseller chart and won the David Gemmell Legend Award. His novels have appeared on NPR’s Top 100 Science Fiction/Fantasy Books list and Locus’ Best 21st Century Fantasy Novels list. Pat lives in Wisconsin, where he brews mead, builds box forts with his children, and runs Worldbuilders, a book-centered charity that has raised more than six million dollars for Heifer International. He can be found at patrickrothfuss.com and on Twitter at @patrickrothfuss.

Jim Zub is a writer, artist and art instructor based in Toronto, Canada. Over the past twenty years he’s worked for a diverse array of publishing, movie and video game clients including Marvel, DC Comics, Disney, Capcom, Hasbro, Cartoon Network, and Bandai-Namco. He juggles his time between being a freelance comic writer and a professor teaching drawing and storytelling courses in Seneca College’s award-winning Animation program. His current comic projects include Conan the Barbarian, the monthly adventures of Robert E. Howard’s legendary sword & sorcery hero, Dungeons & Dragons, the official comic series of the world’s most popular tabletop role-playing game, and Stone Star, a space-fantasy adventure set inside a roving gladiatorial arena.
Loading...
or support indie stores by buying on