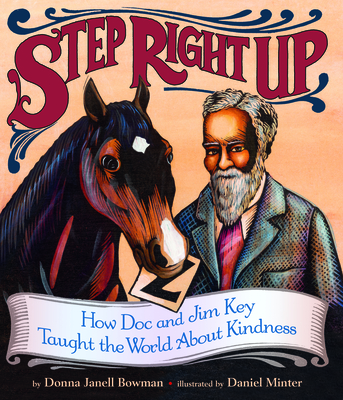 How Doc and Jim Key Taught the World about Kindness

A biography of William Doc Key, a formerly enslaved man and self-trained veterinarian who taught his horse, Jim, to read, write, and do math, and who together with Jim became a famous traveling performance act and proponent for the humane treatment of animals around the turn of the twentieth century.

William Doc Key had a special way with animals. Growing up enslaved in Tennessee, Doc was sent to plantations around the state to care for sick and wounded animals. When the Civil War ended and Doc was freed, he began to dream of breeding a winning racehorse. But those dreams were dashed when his colt was born weak and sickly. Although many people would have euthanized the colt, Doc nursed him back to health and named him Jim.

Noticing a level of curiosity and eagerness in the horse, Doc began teaching Beautiful Jim Key first to recognize letters, then to read, write, add, subtract, and more. Doc soon took his talented horse on the road, spreading a message of patience and kindness, over cruelty, to all animals.

With striking illustrations by Daniel Minter, Step Right Up is the inspiring story of one man and one horse who showed the world the power of kindness.

Donna Janell Bowman grew up on a quarter horse ranch where she trained for horse shows and developed her passion for writing. When she first heard about Doc and Jim Key, Bowman was skeptical about Jim's education. But after doing her own research, she was inspired to share Doc and Jim's fascinating story with young readers. Bowman lives in Texas with her family and their rescue animals. This is her debut book. Daniel Minter is the illustrator of several award-winning picture books. He is also an adjunct instructor of art at the Maine College of Art. Minter finds inspiration for his work from observing the natural world and thinking about history and science. He is the founding director of Maine Freedom Trails, an organization dedicated to identifying sites related to the Underground Railroad and the abolitionist movement. Minter lives with his family in Portland, Maine.
Loading...
or support indie stores by buying on