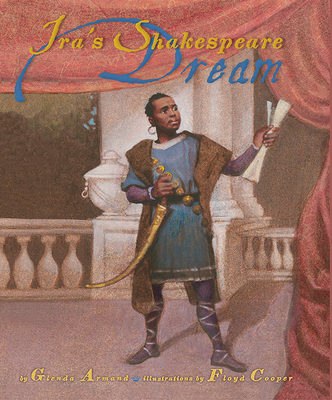 A nonfiction biography chronicling the life of Ira Aldridge, an African American actor who overcame racism to become one of the greatest Shakespearean actors of the nineteenth century.

Ira Aldridge dreamed of being on stage one day performing the great works of William Shakespeare. He spent every chance he got at the local theaters, memorizing each actor's lines for all of Shakespeare's plays. Ira just knew he could be a great Shakespearean actor if only given the chance. But in the early 1800s, only white actors were allowed to perform Shakespeare. Ira's only option was to perform musical numbers at the all-black theater in New York city.

Despite being discouraged by his teacher and father, Ira determinedly pursued his dream and set off to England, the land of Shakespeare. There, Ira honed his acting skills and eventually performed at the acclaimed Theatre Royal Haymarket. Through perseverance and determination, Ira became one of the most celebrated Shakespearean actors throughout Europe.

Illustrated by award-winning artist Floyd Cooper, Ira's Shakespeare Dream is a captivating tribute to the inspiring life of Ira Aldridge, and to the renowned works of William Shakespeare.

Glenda Armand worked for many years as a teacher and school librarian in Los Angeles, California. She won Lee & Low's New Voices Award for the manuscript for Love Twelve Miles Long. Glenda loves reading about history and is passionate about sharing the stories of enslaved African Americans and little-known historical figures. She lives with her husband in West Covina, California. You can visit her online at glenda-armand.com. Floyd Cooper has been honored four times for his illustrations by the Coretta Scott King Award. Born and raised in Tulsa, Oklahoma, he received a degree in fine arts from the University of Oklahoma. In 1984 Frank came to New York City to pursue a career as an illustrator of books, and he now lives in Easton, Pennsylvania, with his family. You can visit him online at floydcooper.com.
Loading...
or support indie stores by buying on