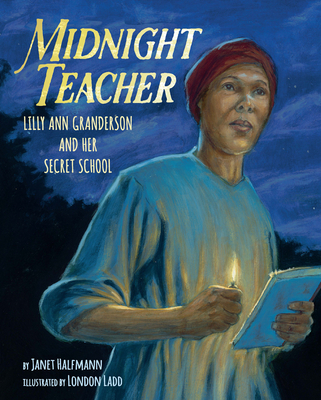 This historical fiction picture book reveals the unknown story of Lilly Ann Granderson, an African-American teacher who risked her life to teach others during slavery.

Born into slavery around 1821 in Petersburg, Virginia, Lilly Ann Granderson secretly learned to read and write from her master's children. Lilly Ann read everything she could get her hands on, and through newspapers, she learned of places in the North where slavery had been abolished. She longed to have that freedom too.

As Lilly Ann's reading and writing skills improved, she shared her knowledge with others by starting a school. After toiling for their masters all day, Lilly Ann's students would slip nervously into the night to attend her midnight school. Every noise reminded them of the painful punishment they faced if they were found out. But the students were willing to risk any danger for the chance at an education. Over the years, hundreds of enslaved men and women learned to read and write under their teacher's patient guidance.

Midnight Teacher is an inspiring testament to an amazing instructor and pioneer in education. Lilly Ann Granderson's steadfast courage in the face of adversity provides an inspiring model for all who attempt to overcome seemingly insurmountable challenges.

JANET HALFMANN is the author of more than forty books for children, including Lee & Low's Midnight Teacher, which Kirkus called An excellent homage to an African-American woman who taught ahead of her time in a starred review. When she's not writing, Halfmann enjoys working in the garden, exploring nature, visiting new places, especially wildlife areas and living-history museums, and watching movies. Halfmann lives with her husband in South Milwaukee, Wisconsin. LONDON LADD graduated from Syracuse University with a BFA in Illustration. He works primarily in acrylic print in a painterly style, for which his picture book illustrations have been highly praised. He carries a sketchbook and paints with him everywhere he goes. Ladd and his family live in Syracuse, New York.
Loading...
or support indie stores by buying on