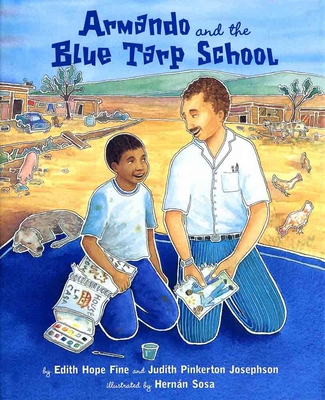 Armando and the Blue Tarp School

The story of a young Mexican boy living in a colonia (trash dump community) who takes the first steps toward realizing his dream of getting an education.

Armando's family is pepenadores, trash pickers, living off things they can use, recycle, and sell from the city trash dump. Armando works with his father to help support the family, but he also finds things for himself--pencil stubs, a notebook, and an old paint set--with which to write and paint. One summer Se or David arrives and begins teaching school on a blue tarp spread on the ground. Armando's parents finally decide that learning may help him find different work when he grows up, so he begins attending the blue tarp school. The children learn to read and write in Spanish and English. They learn math. And they draw, much to Armando's delight. When a fire in the colonia burns down several homes, it is Armando's picture of the fiery night that helps bring outside support and money to construct a school building. The story is inspired by the work of David Lynch, a teacher from New York who first began working in a colonia in Mexico in the early 1980s.